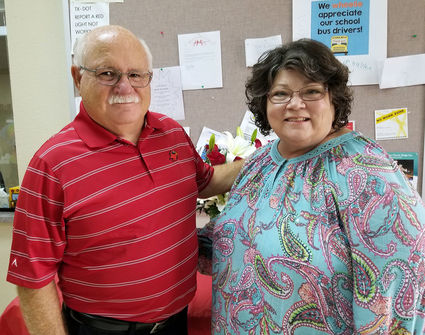 Photo: John Scales is pictured with his wife Brenda at the retirement reception held last week. They just returned from a quick trip to New Orleans to start the unwinding process of retirement.

John Scales said goodbye last week to 17 years as the operations supervisor at Bridge City Independent School District. Well wishers stopped by the bus barn last Wednesday for cake and punch at his retirement reception. Scales said he doesn’t know how many came, but they did run out of cake.

He and his wife, Brenda, left that afternoon for a quick trip to New Orleans to start the unwinding process, but it will take a little while to complete that task.

As operations supervisor, he was in charge of the school district’s transportation, grounds, custodial department and maintenance. He also handled construction “at the superintendents’ discretion.” Scales served under five superintendents and one interim superintendent. Scales said they all had different skill sets and strengths.

With 27 years experience in construction with the family business, Scales Portable Buildings, Scales was capable of overseeing district construction projects if needed and the superintendent at that time was so inclined to have him do so.

When asked “what was the most fulfilling part of your 17 years with the district,” Scales said, “As difficult as it was, recovering from Ike and Rita.”

Both storms caused major structural damage to the district’s buildings. Hurricane Ike destroyed both elementary schools. They were torn down and a brand new combined elementary school was built to take their place.

“The people” are what he is going to miss the most. Working in the background in the bus barn, he mostly worked with adults and didn’t have that much interaction from the students, but when he would walk through the halls of the school at the elementary checking on things, he would frequently get hugs from students.

“It would remind you why you do this,” he said. “Working at Bridge City Independent School District was a really good time in my life.”

He said his retirement had nothing to do with age, but with timing.

“It was time to move on to the next chapter.”

Travel and fishing are the top items on his list. Scales said he has a place at the lake but hasn’t had much chance to enjoy it or fish the last couple of years. That is about to change.

“I prefer freshwater, bass and crappie, but I’ll take it all,” said Scales.

First on the list for travel is Kentucky and Fredericksburg.

“We want to see the replica of Noah’s Ark,” said Scales.

Next year, Scales said he would like to return to Canada for a visit. One of his wife’s sisters lives there. “It was 50 degrees at night and 70 during the day.”

He will also now have more time to spend with his grandkids. Scales has four and they all live on the same street, two to the left of him and two to the right.

When it cools off, Scales will also start work on restoration of Brenda’s family home she grew up in. It was flooded in Hurricane Harvey and repairs have been on the back burner. Unwinding doesn’t mean slowing down.