Dockside dining and drinks are coming to Cow Bayou.

Bridge City developer Wesley Dishon and his wife Ronda are building the fish and fill-up place to be on the water at the intersection of Texas 87 and Cow Bayou, just across the swing bridge.

“There’s only a couple of places to go for drinks and dining on the water between Lake Charles and Houston,” Wesley Dishon said. “We’ll be the only one with fuel.”

High Tides restaurant will feature 3,500 square feet of air-conditioned space and 10,000 square feet under a roof, Dishon said, and the goal is to open up for New Year’s with live music and fireworks.

Like the Wheelhouse in Port Neches, High Tides will have 8-foot garage doors it can open when the time is right.

But unlike the Wheelhouse and other eateries overlooking the water, High Tides will be easily accessed from the water.

“The fuel dock will be right on Cow Bayou, so boats can pull right up into it,” Dishon said.

The developer of Dishon Plantation off East Roundbunch Road is a licensed surveyor with an eye for what could be.

He turned his East Roundbunch property into an address of choice for sailors and fishermen by digging canals from the homes’ backyards reaching into the bayou and beyond.

In keeping with that theme, Dishon just opened up a housing subdivision on Lake Sam Rayburn.

At his restaurant, Dishon plans to serve sandwiches until 4 p.m. At that time, a dinner menu will feature Dungeness crab, snow crab, crawfish in season and Royal Red Shrimp, a deepwater catch from Mobile Bay in Alabama.

“They’re phenomenal,” Dishon said, adding he knows of only one location between here and Galveston that serves them. “They are big and sweet.”

The menu, Wesley Dishon said, “is only seven items and drinks.”

He plans a full-service bar featuring beer, liquor and wine. It will be a membership club, he explained.

After building homes for about 20 years, Wesley Dishon said he decided to venture into something new.

“I thought I’d try this restaurant business,” he said. “If it wasn’t on the water, I wouldn’t be interested. But everybody likes to hang out and listen to live music and have a few drinks.” 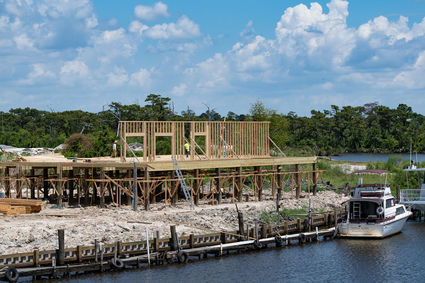 Workmen frame the second story of the "High Tides" restaurant being built by Bridge City's Wesley and Ronda Dishon at the intersection of Texas 87 and Cow Bayou.

Dishon said he bought the property, just west of the Knife River concrete plant, about six months ago and began construction on the bulkhead and pilings two months ago. He elevated the land four feet before beginning his two-story construction two weeks ago.

“If the weather stays right, we’ll have it roofed and sided in two weeks,” he said.

A few months for Ronda’s decorating and final touches and voila!

“This is something Bridge City has needed for a long time,” Dishon said. “Who’d ever guess it would be me taking a chance on it.”