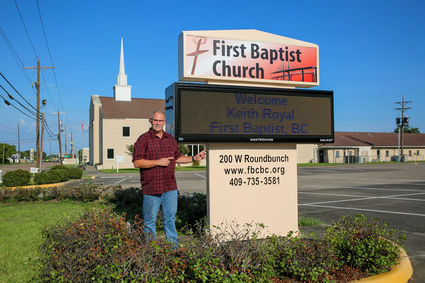 “I feel the Lord led me to stay,” he said in a phone interview.

He came out of retirement to take the position, having previously served as pastor of Winfree Baptist Church from 1995-2016.

“I believe Bridge City needs a strong First Baptist Church.” He said his goal is to “be the church God wants us to be in Bridge City.”

Royal has been married to his wife Cheryl for 29 years and has three adult children: son Kelly Royal, 28; daughter Jordan Haynes, 26; and son Tanner Royal, 24.

The church plans to have a Pumpkin Patch this year opening Oct. 1 and running through Oct. 31. “Families can come take pictures and buy pumpkins,” said Royal. Times for the Pumpkin Patch will be 10:30 a.m.-7:30 p.m. weekdays and Sundays noon-7:30 p.m.