They centered on a proposed 2020 budget of $44 million, including general fund, water and sewer fund, general debt and special revenue funds, that was based on a proposed tax rate of 80.69 cents per $100 of property value.

Knauf’s proposed budget includes about $2.5 million of increased revenues over the 2019 budget, with only a little over $500,000 coming from property taxes. Total proposed ad valorem (property) taxes are $7.5 million, with payments in lieu of taxes for industry at $9.6 million.

The value of city properties have gone up 6.7% since last year.

Major projects for the General Fund include:

Additionally, the General Fund include funds (including salary and benefits) for new positions:

• $86,339 for an additional code enforcement officer

New spending from the sanitation and street sweeping fund includes:

• $65,327 to purchase a pickup, trailer and mobile vacuum cleaner to pick up litter on 16th Street and after city events

“The budget revenue and expenditure recommendations are based on the current financial trends and the operating needs of the City,” Knauf wrote in an introductory note. “There is increased business activity occurring in Orange, sales taxes are increasing from pre-Hurricane Harvey levels and property values are rising; the indications reflect a good economy.”

“We used to look at budgets and see which ones we could postpone for future budgets,” Knauf told city councilors on Aug. 8. “We’re not going to be able to do that.

“The game has changed. This is a heavy capital improvement budget. Normally, I would not have recommended such a big increase, but we need to look to future years.”

Besides capital improvements, Knauf’s budget includes a 2 percent cost of living increase for all city employees and “replacement of a lot of vehicles.”

Council members favored adding another employee holiday, Veterans Day, at a cost of $25,000 for police, fire and public works overtime. 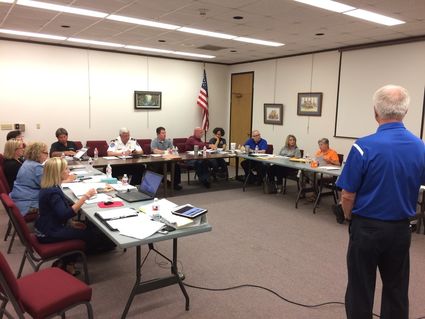 “I feel for the taxpayers, but playing the lottery is not an option,” Knauf said. “One thing I learned in my life is either you manage change or let change manage you.”

“We’re preparing for major growth,” he said. “You can’t enjoy major growth if you’re not prepared for it.”