Vine time for all at winery

The workers wearing the green and white T-shirts looked liked they’d lost their minds, swatting at the top of head-high greenery with old corn straw brooms.

But there was a method to the madness last weekend at the first crowd-sourced grape harvest at Orange’s Free State Cellars winery.

“Big wineries have some type of machine that picks the grapes for them,” Victoria Ibarra of Orange explained.

“But the classic way is to hit it with a broom. That warns the bugs and wasps, ‘We’re coming,’ and we don’t really pick them.

“If they fall off, they’re ready.”

Free State Cellars is located at 4702 Tejas Parkway. The seven acres of real estate planted half with bronze Magnolia muscadine (white) grapes and half with black Noble muscadine (red) grapes used to be Piney Woods Winery, explains Mandy Hernandez, one of six owners.

The others include four of her siblings -- Dana Swope, Mike Swope, Laura McHugh, Stephanie Bingham – and a nephew, Nick Swope, Dana’s son.

They purchased the property from the family of Alfred Flies, who opened Pine Woods Winery in 1985. It was the 14th winery in Texas, Hernandez said.

Saturday’s was the third harvest by the Swope family since buying the land just in time to get flooded by Tropical Storm Harvey.

But it was the first that included others who are not part of the large family.

“We just opened about two months ago,” explains Grace Hernandez, who handles marketing and event planning.

“We were doing some private tastings, and now the doors are open to the public and we’re booming.”

Free State Cellars offers wine by the glass or bottle.

“With our first post about [Saturday’s] harvest, we had 400-plus interactions and we reached 6,000 people,” Grace Hernandez said. “We said, ‘How are we going to control this many people?’’’

Maybe it was the Aug. 17 weather, which was both super hot and super wet. Fewer folks than expected showed up, but the marketing whiz said it didn’t matter.

“We filled up all our crates,” Grace Hernandez said.

They wound up with 25 volunteers helping out 15 family members.

“We enjoyed it,” Stephanie Bourgeois of Sulphur said, speaking for herself and sister-in-law Katy Bourgeois, after a morning in the vineyard.

“We’re not scared off by a little work. The weather was very hot, but we were blessed with a few clouds. It’s rather therapeutic.”

A second chance for would-be grape whackers will be here soon enough. Free State Cellars is signing up volunteers to help with the red grape harvest on Sunday, Sept. 8.

Hopefully, Mike and Nick Swope are through prepping the white grapes by then.

Mike Swope, the man in charge of machines at the winery, was doing the mental math Tuesday afternoon, but wasn’t liking the results.

“Last year, I spent 40 hours pressing grapes and I only had half as many grapes,” he said.

He complained that he hoped to run three presses but was down to just two after a part broke and he had to re-order from Italy.

“Everything in wine has to come from Italy,” he said. 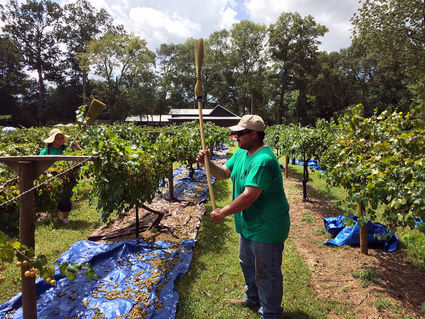 Then he picked himself up from the long wooden table and trudged off to run a mechanized grape crushing machine with the help of three friends.

That was the step before pressing the mash.

After pressing, yeast is added to convert sugar to alcohol. That process involves about two weeks in 55-gallon barrels, Mandy Hernandez said.

Then, the liquid is transferred to stainless steel vats and left to age for four to six months. Sediment is removed in stages along the way, and it’s ready to bottle, she said.