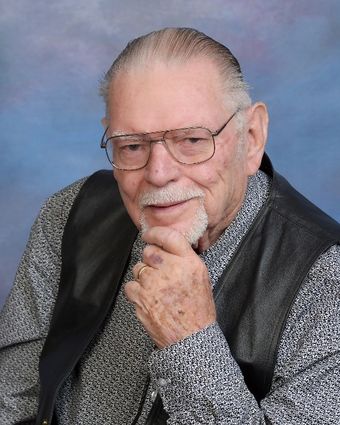 Lonnie Goodwin Dickey, 89, resident of Baytown and native of Orange County Texas, received healing grace and mercy when his Lord and Savior called him heavenward on August 23, 2019, after a lengthy battle with pulmonary fibrosis.

Funeral services will be at 10:00 a.m., Tuesday, August 27, 2019, at Cowboy Church in Orange. Officiating will be Pastor E. Dale Lee. Burial will follow at Hillcrest Memorial Gardens Cemetery.

Lonnie served four years in the US Air Force, stationed at Shaftsbury AFB and Ruislip AFB in England, and McNeil AFB in Tampa FL. Though he began his career with Gulf Oil Refinery in Port Arthur in 1954 as a laborer, Lonnie held an executive position upon retirement from Gulf/Chevron/Amoco Petrochemicals Cedar Bayou plant in Baytown in 1992. Among his career achievements are special assignment to Japan as a refinery supervisor. Lonnie’s co-workers nicknamed him “The Legend” and affectionately called him “Papa Smurf.”

Lonnie’s late mother Juanita Dickey Teaff of Orange was also particularly proud her boy Lonnie was the grand prize winner in the Most Beautiful Baby in Orange contest circa 1932.

Lonnie held strong feelings about love of God, love of family and love of country.

At his death, Lonnie was a member of the Cowboy Church of Orange County and a supporter of its arena ministry.

In his earlier years, Lonnie’s favorite activities as a young father were entertaining his children and planning camping trips to national and state parks.

His travel motto was, “See your country first.” Lonnie’s commitment to marriage as the foundation of family included a lifetime of dinner dates with his beloved wife Norma.

Lonnie and Norma celebrated their 68th wedding anniversary two days before his death.

A self-taught carpenter, plumber, gardener and internet researcher, Lonnie’s research mantra was, “Google it.” He studied recipes and became an accomplished home chef after his retirement.

Lonnie had a tireless will to see a project to completion; at age 80, he rescued and rebuilt his mother-in-law’s Orangefield home after Hurricane Ike.

Special thanks to Lonnie’s children and grandchildren and their spouses for the love, help and concern during his home hospice care; special thanks also to extended family Ronnie and Jolene Whitehead, cousins Cory and Pete Brunson and all other friends and neighbors who provided outpourings of love with food and visits. The family would like to express heartfelt gratitude to Faith Hospice of Baytown, and to recognize Ruth, Felicia, Kay, Tina and Chaplain Paul for their compassionate care and concern. Their tireless efforts from March 7 to August 23 will be long remembered with love.