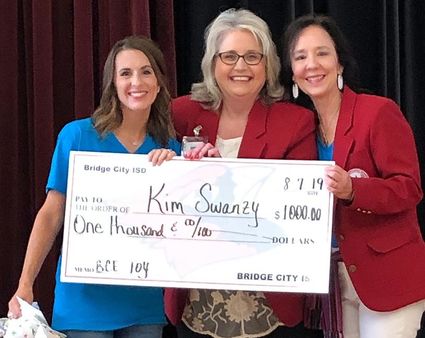 Bridge City ISO is proud to name Kim Swanzy as our district's Elementary Teacher of the Year! Mrs. Swanzy is one of our phenomenal kindergarten teachers, always dedicated to overall growth for each child. Beginning her fourteenth year of teaching, she has been employed with our district four years. Hired to work at BCE initially as an educator in one of the Response to Intervention classrooms, Mrs. Swanzy is beginning her third year as a kindergarten teacher. Mrs. Swanzy's family is her dearest treasure, and spending time with them is her top priority.

Baking and yardwork are activities she enjoys. Mrs. Swanzy's strong work ethic is one that continually goes above and beyond what is asked of her to ensure student success. A wonderful asset to our learning community, Kim Swanzy displays enthusiasm, professionalism, and a love of learning each day at Bridge City Elementary School.