An Orange landmark could be headed to the trash heap without a change of priorities at City Hall.

The giant wooden Lions Den children’s playground at Lions Den Park, between Adams Bayou and 16th Avenue off MacArthur, is in need of repair or replacement 20 years after it opened.

Kelvin Knauf, acting city manager, says it will cost between $650,000 and $750,000 for the City of Orange to replace it with a similar structure.

“But if we go with a cheaper playscape, like the other city parks, we can have money left over to do things at the new [Boat Ramp] pavilion,” he told city council members in August.

He estimated a composite playground like the city recently installed at Navy and Sunset Parks would cost about $200,000 and have a lifetime of 30 years.

If approved in the city’s 2020 budget, it could be installed any time in the next fiscal year, which begins Oct. 1, he said.

The city is also looking at playground updates at Northway Park and Memorial Park, the latter getting a hardy boost from Dow Chemical for its ballfields.

“Did any of those people volunteer to raise money or come out and volunteer their labor when we built it?” former city council member Deborah Mitchell asked about the people who sit in council chambers today.

Memories were made by the thousands at Lions Den Park, which was opened in 1999.

The community-built project designed by local school children with architectural assistance and project management from Leathers & Associates of Ithaca, New York, was three years in the planning, Christi Moerbe recalled.

Pam Honeycutt remembers Entergy donated the poles and drilled the holes for framing the structure which includes swings, rings, slides and climbing challenges built around a tugboat, a locomotive, a spaceship and a school bus, to name a few.

Honeycutt, Mitchell and Moerbe were the three co-chairmen for the effort, which included a lot of fundraising by the Lions Club and Chamber of Commerce as well as all the area’s industries and lots of volunteer hours.

Most of the construction happened over two weekends. As many as 300 volunteers showed up to work some days. It cost about $350,000 for materials.

“Chuck Pinto was the city manager then,” Honeycutt recalled. “He promoted the project, and he put in a lot of the posts himself.

“Joe Will was the parks manager then, and he loved this project.”

Former Mayor Dan Mohon recalls helping out on a couple of Saturdays and has sweet memories of the finished product.

“It is really a unique structure,” he said. “When my grandkids were little, I took them there to play a lot.”

James Lawrence still sees the crowds. The longtime city employee has been Orange’s parks manager for the past six years.

“As parks manager, this is my destination playground,” Lawrence said. “The others are community playgrounds.

“When we get buses of school children touring at the Stark Foundation, either the art museum, Lutcher Theater or Shangri-La, they come here to eat lunch and play.

Lawrence adds that he prefers it to other similar parks built in Southeast Texas, like Tugboat Island in Port Neches, Fun Island Depot on Pleasure Island and Imagination Station in Beaumont.

“This park has been so used,” Honeycutt said. “Every weekend you come out and it’s loaded with kids. There’s always two or three birthday parties going on.”

Lawrence and Honeycutt recall when a tour of Shangri-La began at a dock on Adams Bayou next to Lions Den Park. The children were taken to the botanical gardens by boat and delivered back to Lions Den Park to wind down before returning home.

Midway through a 90-plus day last week, Catrina Sargood of Vidor was chaperoning 2-year-old William Granger through the park.

“Every time he has a doctor’s appointment we come over here,” Sargood explained. “He loves going to the park. It’s his reward. Instead of ice cream, he wants to come here.”

Vicki Chappelle lives near Lions Den Park now and brings her grandchildren to play there regularly.

“I’ve been in love with this place for a very long time,” she said. “I remember we lived in Mauriceville and came over here a lot.

“One of the perks for living right here next to it is I can bring my grandkids.”

Honeycutt, Moerbe and Mitchell were shocked to hear that the wooden playscape is in jeopardy of disappearing.

“We built it and turned it over to the city and the city said they’d keep it up,” she said.

“If Lions Den was torn down and replaced with a cheaper one, there would be a lot of people upset. A lot of people who worked on it have passed away – my parents, others.’” 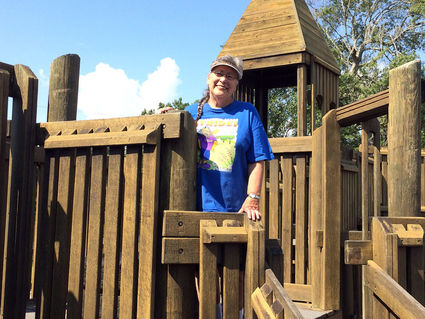 “What a shame,” Mitchell said.

“The park symbolizes community and unity effort across politics. It is time for the elected [city council] members to learn the history and make smart decisions with a progressive attitude.”

Even Lawrence campaigned to save the playground.

“We’ve had people come in from Beaumont to Lake Charles to bring their kids here,” he said. “This is my destination playground. It’s hard to go backward.”