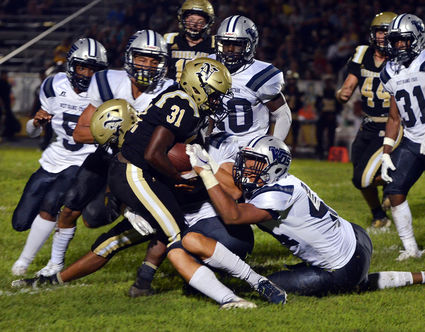 The Chain Gang defense swarms to the ball in the 21-20 win over the Bulldogs. RECORD PHOTO: Meri Elen Jacobs

Photo: The Chain Gang defense swarms to the ball in the 21-20 win over the Bulldogs.

The young Mustang team had to grow up fast when they faced an experienced Nederland squad this past Friday. The Mustangs got their revenge by beating the Bulldogs 21-20 after getting beat in their opener last year, 19-18.

“Because of our football maturity, we made a lot of mistakes,” Head Coach cornel Thompson said. “But they played hard 48 minutes and that’s what I asked of them. We were able to stay in long enough to win it and I am elated over the victory.”

The Mustangs started out early by jumping on the board on their first possession. Quarterback Jerren Terrell punched it in from just two yards out after hitting Artavious Samuel on a 38-yard pass down the Bulldog side line.

The Chain Gang defense was able to force Nederland to punt twice before Terrell and Company marched down the field again and scored on a pass to tight end Shemar Manaway. Both of Angel Ibarra’s PATs were good and the ‘Stangs led, 14-0 early in the second quarter.

The Bulldogs finally got on the board after two Mustang fumbles. Nederland was able to capitalize on another fumble early in the third quarter. However, their attempt for the two-point conversion was thwarted and the Mustangs hung onto the lead by one. The ‘Dogs were able to push their lead to six on their next possession. They decided to try for two again but were penalized five yards for two men in motion and kicked the extra point instead.

The Mustangs took the lead in the fourth quarter when sophomore Elijah Gales took the ball 16 yards for the score and Ibarra’s PAT was good. Nederland drove all the way to the 31-yard line on their next possession, but the defense held and the Mustangs took over, rushing for 55 yards before running out the clock.

Now the focus shifts to this week when the Mustangs will show off their new turf field and scoreboard while hosting crosstown rivals, the Little Cypress-Mauriceville Bears. The Bears are coming off of a 21-7 win over the Woodville Eagles.

“This week is a community affair,” Thompson said. “Everyone knows each other and the daddies all work together on chemical row. The house will be packed Friday night and you can beat that LCM will give a phenomenal effort.”

The Bears run a spread offense with third year quarterback Ethan McCollum at the helm. According to Thompson, they have a quicker defense than they had last year that’s led by linebacker Matthew Lopez.

“There’s a lot of local interest in this one,” Thompson said. “Coach (Randy) Crouch knows what we do and will use that to try to beat us. It’s going to be a great game!”