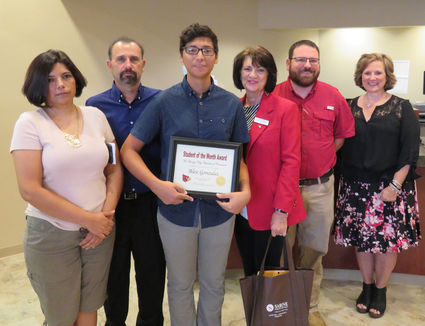 The Bridge City Chamber of Commerce has announced that the September Student of the Month for Bridge City High School is Alex Gonzalez. Alex was presented his certificate and gift bag by Board Member/Ambassador, Lucy Fields, Bridge City Council Member, at the September Networking Coffee hosted by Sabine Federal Credit Union.

Alex’s Clubs and Organizations include:

Alex has volunteered for The Giving Field.

Tami Goss, Director of Bands, said, “Alex is an extremely talented student. His academic endeavors are quite impressive, but he is also a very talented young musician. He is also highly adored by many of his classmates and peers for his kind disposition and welcoming personality.”

Shannon King, Social Studies Chair, Core USH, OnRamps USH, APUSH, UIL Academic Coordinator, said, “Alex is quite the scholar who cares a great deal about the end results. When posed with a critical thinking question especially perplexing, Alex is able to “think outside the box” and get to the heart of the issue. Alex’s insight into complex situations and his ability to explain these situations in terms his classmates makes him a great member of any team. I look forward to the new experiences and successes Alex will encounter in his future endeavors.”

Hannah Landry, Math Teacher, said, “Alex Gonzalez is an exceptional learner and outstanding performer. It has been a privilege teaching Alex in PreCalculus and Calculus during his Junior and Senior years, where I have been a first-hand witness of these qualities. Alex also is willing to lend a helping hand when his classmates are in need. He has big dreams for his future, and he will most successful at achieving his goals.”

Lisa Tarver, Business Teacher, said, “I have the pleasure of teaching Alex Gonzalez this year in Accounting I. Alex is an awesome student. Not only is he incredibly focused, dedicated and hard-working, but Alex is also one of the nicest students on campus. He has a great attitude and is always ready to lend a hand to any student in need. I know he will go on to achieve greatness in the future and make BCHS proud.”

After graduation, Alex plans on attending an Ivy League College or a university on the West Coast, possibly Stanford, UC Berkeley or UCLA and majoring in either mathematics, economics or astronomy.