Photo: Quarterback Jerren Terrell looks for an open receiver early in the rivalry game against the LCM Bears. Terrell finished the 36-14 win with 10 of 18 competitions for 82 yards. Record Photo: Meri Elen Jacobs

The cross-town rivalry matchup between the West Orange-Stark Mustangs and the Little Cypress-Mauriceville Bears, where the new turf and scoreboard were the focus for most the first few minutes of the night, did not disappoint the huge crowd who came to watch. Up until the middle of the third quarter, the Bears were able to hang on and fight but WO-S’ Elijah Gales proved to be too hard to handle and the Mustangs won, 36-14.

“I was happy with the win, but we didn’t play very well the first half,” Head Coach Cornel Thompson said. “We didn’t play our best and did not improve from the first to the second game. I attribute that to our football maturity. We have a lot of sophomores and inexperienced players that don’t have varsity experience.”

The Mustangs made it look easy as they moved the ball down the field to start the game, 60 yards in 12 plays, before Ja’Marcus Ross rushed in from 4 yards out to put the first six points on the board. Kicker Angel Ibarra’s kick was good and the Mustangs led, 7-0.

LC-M marched the ball down to the 22-yard line in nine plays but the Chain Gang defense held and the Bears’ Robby Wedel went for a field goal that was too short.

WO-S had no trouble moving the ball back down the field, but a costly fumble gave the ball back to the Bears, who quickly turned the gift into 7 points.

On the next series, Gales was in on six of the 11 plays before bursting through the Bear defense on an 18-yard run for six. The Mustangs led at the half, 14-7.

Using Gales again after the half, WO-S was able to get on the board on their first series with an 8-yard run. The kick was no good, but the kick-off proved to be very good to the Bears as LC-M’s DJ Spears returned it 88 yards for the score.

Chewing up the clock, Gales again hit pay dirt eleven plays later on a four-yard play, putting the score at 26-14. Gales wasn’t finished with his show as on the next series, he burst through the LC-M defenders for a 52-yard touchdown. Angel Ibarra also hit a 37-yard field goal late in the game to finish off the scoring.

The young ‘Stangs will face a tough Newton team in Newton on Friday night. The Eagles are currently on a 32-game win streak, and Thompson does not want to be win number 33 for them.

“The kids up there don’t have to brag about what they do,” Thompson said. “They are tough country kids and if we sashay into Newton on Friday night, thinking that we have this game, they will hand us our hats.” 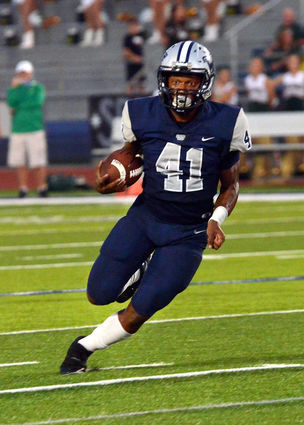 Toting the ball for 230 yards, sophomore Elijah Gales was a key player in the Mustang win over the Bears. Gales played both offense and defense and was 2 for 2 for 21 yards on catching Jerren Terell passes.

“Everyone gives us their A game,” Thompson said. “It’s time we start growing up. If we can line up and tackle, I think we’ll be OK.”

All tickets must be purchased Friday night at the gate in Newton. Prices are $5 for adults and $3 for students.

The JV team beat LCM this past Thursday, 39-7. Jamaal Shaw scored three touchdowns while quarterback Dakarion Judge had two and Marqurious Garrett had one. Offensive standouts for the team were Judge, Shaw, Isaac Morris, Isaac Medina, Casen Barnes and Makyan Mickey. Standouts for defense were Kaiden Berry, Iverson Godrey, Demarcus Thibodeaux and Dylan Spencer. The combined freshman and JV team will play one game against Newton at home Thursday night at 6.