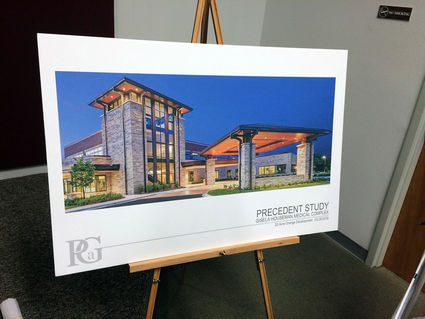 Photo: Orange City Council agreed on a half-dozen motion to set the stage for the development of the Gisela Houseman Medical Complex on 20 acres at Eagle Point, near the intersection of Interstate 10 and Highway 62.

The city of Orange wrapped up its $45 million 2020 budget Tuesday and took several big steps regarding the city’s future.

Mike Kunst’s agreement to be the new city manager was approved by city council at a salary of $150,000 per year.

Council approved the plans for an $800,000 pavilion to be built this winter at the Orange Boat Ramp, with the aim to be finished in time for the Bassmaster fishing tournament in late May.

Additionally, council approved a half dozen legal documents to nail down a 20-acre donation from Gisela Houseman of property near the Interstate 10 service road and Highway 62 to be used for medical facilities.

Plans are for the Gisela Houseman Medical Center to be home to a small hospital, out-patient surgery suites and a large array of medical specialists.

With no one from the public commenting, the city held its second public budget hearing on a proposed tax rate of 80.69 cents per $100 of value, a slight increase from last year’s 80.51 cents per $100.

A final vote on the tax rate will take place at the next regularly scheduled council meeting, 5:30 p.m. Sept. 24.

There was no public comment on the budget during that Tuesday public hearing, either.

The 2020 budget includes $1.5 million more money in the general fund than the updated 2019 budget, which got its final amendment Tuesday.

However, the total amount of funds in the 2020 budget is nearly $2 million less than the 2019 amended budget.

All votes Tuesday were unanimous with all council members present.

“Mr. Knauf presented us with an amazing budget,” Spears said. “Things that have needed to be addressed for years are now being addressed.”

As usual, the lion’s share of the HOT tax money was saved for the city’s Convention & Visitors Bureau, a total of $494,000.

Knauf noted the new budget does include iPads for each council member to use to download their pre-meeting council packet each week.

The much-ballyhooed MadVac, a large vacuum cleaner attached to a golf cart that Knauf wanted the city to buy, is up on the air, Knauf said.

He said he’d been told a small streetsweeper might do the job better.

The building will be 100 feet by 100 feet, with LED lighting and all the electrical wiring raised to be out of the way of future flooding. It will have several motorized doors on each end and four large fans to cool things off.

Wolf said it could host major concerts with the surrounding grass lawn used for additional seating.

“It will really be a show place,” Wolf said. “It’s going to change and enhance Simmons Drive to the utmost.”

The project’s $800,000 budget was funded by some fo the $8 million in certificates of obligation council voted to take on last year.

An official extension to March 1 was okayed for the EDC as a deadline for the start of construction on Boardwalk Grille, and council voted to add Veterans Day as an official holiday for city employees.

U.S. Rep. Brian Babin was rented three unused offices at the new City Hall on 16th Street for $500 per month.

Grand opening for City Hall will be held at 4 p.m. Thursday, Sept. 12.