She’s known around town as one of the Trashy Women, or one of the Garden Ladies. But mostly, Sandra Hoke is known as a woman who cares about Orange.

“I know our community is so incredibly better off for having Sandra be a part of it,” Stephen Lee, President and CEO of First Financial Bank of Southeast Texas, said.

“And I’m so very happy to recognize Sandra Hoke as our 2019 Athena Leadership Award winner.”

Hoke, a teacher for two dozen years, mostly at Orange schools, was the 27th winner of the award presented annually to individuals who excel in professionalism, give back to their community and help raise up other leaders, especially women.

“It was very gratifying and humbling to me,” Hoke said a few days after the ceremony. I just do the things that I enjoy doing. And I have a passion for some of them.

“I guess they used that to choose me, but I don’t think I deserve any recognition for what I do. I do it because I want to, not for recognition.”

She and Deborah Bednar have taken on the “Trashy Women” nickname in their fight against litter as the leaders of Keep Orange County Beautiful.

This is in addition to Hoke joining Claire Smith as the “Garden Ladies” in 2016 when they founded Field of Plenty for Orange Christian Services.

The garden has produced more than 11,000 pounds of fresh fruits and vegetables to help those in the community who face food insecurity.

She is a member of the First United Methodist Church and a volunteer at Shangri La Botanical Gardens, where her husband, Michael, had been the first executive director before his death in 2016.

“All my volunteering is all because of Michael,” she said. “When he died, I decided I couldn’t sit around feeling sorry for myself. I had to stay busy.

“So, I said ‘Yes’ to everything. But I love it. I love everything I do. I do what I like, and I love digging in the dirt.” 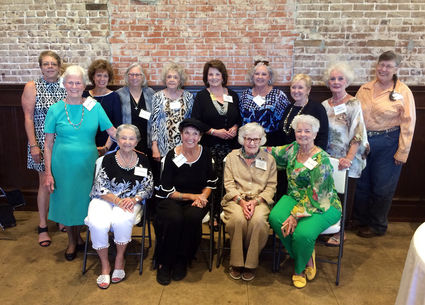 “She could have easily turned the mantel of responsibility over to others and said, ‘It’s your turn now,’” Lee said. “But that’s certainly not in her nature.