Photo: With help from other Mustangs, Artevius Samuel pulls Newton's Kevin Watson to the ground. Watson finished the game with only 64 yards.

The Newton Eagles are a tough team to beat. West Orange-Stark found that out first-hand this past Friday night as the Mustangs fell 20-14 at Eagles Stadium.

The Mustangs, who know a little something about winning games and state titles, but had trouble getting into the end zone when they had opportunities. After the opening kickoff, the Mustangs fumbled away possession. Newton capitalized quickly, working its way down the field for a 1-yard touchdown run by Valdarin Fowler. A missed extra point kick left the Eagles leading 6-0 with less than three minutes wound off the clock.

In the second quarter, the Eagles would step up again, moving the ball 58 yards in just five plays with Kevin Watson scooting in from 13 yards out for the TD. A two-point conversion put the Eagles ahead 14-0.

The Mustangs found its offense finally, marching inside the Eagles’ 20 but couldn’t convert on a field goal attempt.

After Newton’s potent offense was held and forced to punt, the Mustangs got rolling again, moving 57 yards for their first score of the game late in the second quarter. Elijah Gales, who finished the night with 91 yards, got the call and went 10 yards for the score to pull the Mustangs to within 14-7.

With the Mustangs within striking distance, the Eagles pulled a play out of their bag of tricks, using the hook-and-ladder to go 46 yards for the touchdown. Nathan Williams hit receiver Dominique Spikes and then he dumped it off to Deanthony Gatson, who then took it in for the six points.

The Mustangs, with their backs to the wall, came up with a huge pass play for 68 yards and a touchdown when Jarren Terrell hit Jaden Jones for the score. The PAT kick put the Ponies in the perfect position for a late-game win, down by six points at 20-14.

The Mustangs defense forced the Eagles to punt on their next possession, leaving WO-S just enough time to move the ball back down the field. An Eagles interception with just seconds left on the clock sealed the deal and gave the Eagles the win at home.

The Mustangs will take on Crosby this Friday at home.

Three weeks into the 2019 season, the Orangefield Bobcats are undefeated, taking down Shepherd 27-21 in their latest non-district victory.

The Bobcats let the Pirates know very quickly that they were in for a game as Orangefield took the fourth snap from scrimmage for a touchdown. Kaiden DuBose ran 49 yards for the score, though a missed PAT kick left the Cats up 6-0 early in the first quarter.

On Orangefield’s next possession it was an aerial attack that garnered the desired results when Gunner Jones launched a play action pass to Kent Michael for 18 yards and a TD. At the end of the first quarter, the Bobcats led 12-0.

After a Shepherd punt, the Bobcats went back to work, though it appeared they would stall as they faced a fourth and short situation. Instead of settling for a field goal, DuBose ran the option after moving to the quarterback position, going 14 yards for the score. He finished the game with five carries for 70 yards. The extra point kick was good to give Orangefield a 19-0 lead midway through the second quarter.

Shepherd managed to score its first touchdown of the game with just under three minutes to go as Kenan Turner running 13 yards for the TD and a 19-7 difference at the break.

The Pirates had comeback on their minds with the start of the second half, putting together a 19-play drive that spanned 79 yards. With the Pirates facing fourth down from the Bobcats 7, quarterback Dezmon Yates tossed a pass into the end zone that fell incomplete. A pass interference flag against the Bobcats gave Shepherd a second chance and this time Turner scored from the 1 yard line to cut the lead to 19-14.

The Bobcats’ offense reacted swiftly. A great kickoff return by Clayson Choate and a penalty put the Cats at the Pirates’ 36 yard line. Choate eventually found his way into the end zone on a 19-yard run. Jones hit Choate with a pass for the two-point conversion and the Bobcats were up 27-14 as time ran out in the third quarter.

After back-to-back turnovers by both teams, the Pirates finally settled into a groove, driving 40 yards, capped by Turner’s 16-yard TD run to pull Shepherd to within a touchdown at 27-20.

The Orangefield defense stiffened in the waning moments of the fourth quarter, forcing a turnover on downs as Shepherd tried desperately to make something happen with its passing game.

The Bobcats are off this week but return to start district play against Buna on September 27 at home.

It was just a matter of time before the Bridge City Cardinals found the win column, taking their first victory of the 2019 season in a road trip to Anahuac, 35-21, this past Friday night.

The Cardinals, now 1-2 for the year, got on the scoreboard first with a 19-yard touchdown on a keeper by quarterback Ethan Oceguera.

The Panthers were able to match that effort to tie the game at 7-7 but Andy Lara wasn’t having any of that nonsense as he put the Cardinals back on top with a 36-yard touchdown run for a 14-7 lead.

A missed extra point attempt by the Panthers on another score left the score 14-13 heading into the halftime break.

Oceguera wasn’t finished, scoring again for the Cardinals on a four-yard keeper to push BC back ahead 21-13. Anahauc came back again and, with a two-point conversion, tied the game at 21-21.

That’s all the Bridge City defense was willing to allow, shutting out the Panthers for the balance of the game. Meanwhile, Dorian Pruitt scored from the four yard line to put the Cardinals ahead 28-21 and Harrison Gauthier added the insurance with a one-yard TD run for the 35-21 final.

The Cardinals head to Silsbee for a game Thursday.

Little Cypress-Mauriceville got an up close and personal look at what a state-ranked opponent is like when Jasper rolled to a 42-14 win this past Friday night.

The Bears put a couple of touchdowns on the board thanks to a quarterback keeper with Ethan McCollum crossing from the 10 yard line in the first half and again in the fourth quarter on a four-yard run.

The Bears, now 1-2 with the loss to Jasper, travel to Vidor for a game this Friday. 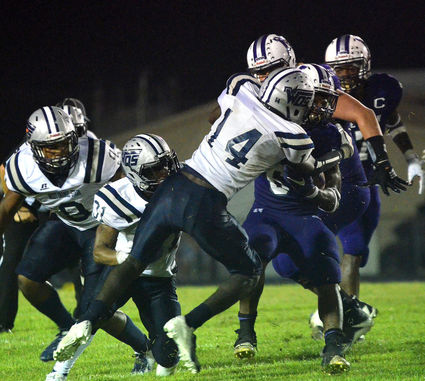 The tandem of Levi Rogers and James Menard accounted for all of Community Christian’s points this past Friday night but their effort fell just short of a win as they left the field against Emery Weiner with a 22-22 tie.

Rogers pulled in two touchdown pass receptions from quarterback James Menard, one on a fourth down and goal. Meanwhile, Menard caused a fumble, picked it up and ran in from midfield for the Lions’ third score of the game.

The Lions are now 1-1-1 and will take on Houston Fort Bend this Friday with kickoff at 6 p.m.