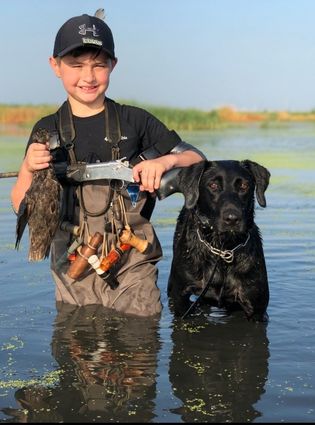 Photo: Lawson Burtsfield and Joli took to the marsh this past weekend and enjoyed a good shoot.

All along the coastal prairies the highest numbers of blue winged teal reported prior to the opener came from either freshwater locations or agricultural fields. The saltwater marshes from Winnie over to the east side of Lake Charles were nearly void of any teal leading up to the opener on Saturday. The lack of huntable numbers of birds kept many hunters at home over the weekend while only the die hards braved the less than desirable conditions. The combinations of high temps, constant storms building up off of the coast, and a lack of wind did little to help out those hunters in the coastal marshes.

Looking ahead we are now on the down side of the full moon but there is still plenty of benefit to be had.

The full moon contributes to the migration as a majority of the birds do most of their traveling at night and then rest or feed during the daylight hours.

Teal fly great distances and early migrators are often very difficult to keep track of as they are truly “here today and gone tomorrow”.

Early last week there were areas in both Texas and Louisiana that were packed full of birds on Monday and Tuesday.

On Saturday those same birds were sipping margaritas in Mexico as they had left seemingly overnight for their wintering destinations leaving many hunters scratching their heads and scurrying for another plan.

There is no doubt that the largest part of the teal migration has yet to happen so the hopes of all waterfowl hunters are still high.

Hopefully the numbers of birds coming into our area will build as the week progresses and the success rates for all the hunters will increase by next weekend and throughout the rest of this early season.