Orange Countian nabs a lead role in “Spindletop: The Beginning”

Photo: The first three days of shooting for "Spindletop:The Beginning" took place at Heritage Village in Woodville this weekend. There is one day of shooting left to be done on a ranch in Kountze. There are a number of Orange Countians in the cast and crew. Pictured L to R: Travis Myers, director of photography, John Frederick as Corp. Henry and writer/director, Jason Leal. RECORD PHOTO:Penny LeLeux

Being retired Navy, John Frederick loves it when he can land a military role. He snagged the part of Corp. Henry in the short film, “Spindletop: The Beginning” which filmed in Woodville at Heritage Village over the weekend. It is a tale of a young Pattillo Higgins, who was a troublemaker and prankster. Higgins is the one that persuaded Anthony Lucas to drill in Beaumont resulting in the “Lucas Gusher” in 1901.

Frederick’s character is a Union soldier in pursuit of the mischievous youth in this first phase of a planned future feature.

“Spindletop has been a lot of fun,” said Frederic. “Even though it is a short film, it has a lot of characteristics of a feature film.”

“I think June Garcia (the casting director) did an excellent job of selecting the cast for this film. Keegan [Bouton] is spot on the right person for Pattillo Higgins. He has been a blast to work with. Parker [White] has been fun to work with, my Private.”

Frederick said Jason Leal, the writer/director of Spindletop had done an excellent job on the story of young Pattillo Higgins.

“I’ve enjoyed working on this film even though it has been extremely hot. There were some rough conditions…that wool uniform.” His costume was a wool jacket with a heavy, cotton, long sleeved undershirt and wool pants. “It was more like a wintertime outfit with us shooting in 90 degree weather.”

“The rest of the crew was unbelievable, there was the PA making sure we had water all the time… I drank so much water today that I’m going to explode here in a minute, probably.” He laughed.

Frederick had nothing but good things to say of everyone, including Gladys Thomas the costume mistress and Allison Pierce and Jordan Baldwin in hair and makeup. “Those two girls, oh my god, they are the ones that made this film fun.”

“Heritage Village, it was almost like he wrote that script for it,” said Frederick. He said as soon as he walked in the little town he could see everything in the script.

This is not Frederick’s first role. He’s relatively new to acting, coming up on two years, but he has picked up some interesting parts in that short time.

“I retired from the Navy after 20 years in 2011. I retired as a Chief Petty Officer, E7,” said Frederick. He said he mainly worked with sonar.

When he got out, he tried working at some of the plants and other places, but just couldn’t get into the civilian mindset and decided he was going to stay retired.

“I’ve loved movies forever. Me and my boys will have entire conversations that are just movie quotes. It drives my wife nuts,” he said. “We could act out entire movies. I always wanted to be an actor. I think actors are amazing.”

He started doing some background and stunt work after Hurricane Harvey.

While up north during Harvey he met a guy and friended him on Facebook.

Frederick told him how being in movies had been a dream of his. The man put him in touch with his casting director who put him as background on a feature for four days in Dallas so he could see if he liked it.

Frederick said after all the connections he made the e-mails started rolling in and he started going on auditions left and right.

He got a part on an episode of “Disappeared” from a head shot because he looked just like the real person. After sending in a requested self tape, he got his first lead role, but none of his dialogue was heard. The story was narrated.

Frederick then captured a principal role in Tom Hank’s upcoming feature, “Greyhound,” to be released in May 2020. It is another period piece set in World War II.

Frederick not only had a part in the movie, but as a retired Navy Chief, he was utilized as a technical advisor on Navy procedure. Being under a nondisclosure agreement, he can’t really divulge any more about the film until it comes out.

He was also on seven episodes of season five of “NCIS: New Orleans.” “I never did get any dialogue,” he said.

You can spot him, barely, as a waiter in the Copa Cabana in “The Green Book.”

His most interesting shoot was for a Chinese production company. Frederick said he was the only non Chinese member in the cast. The entire script was in Chinese, except for his part and because of the translation, it didn’t really make sense, so he was allowed to rewrite them to read more accurately.

The producers would then send him clips asking what he said in that part. He typed the dialogue so they could get it translated into Chinese for subtitles.

Frederick also played a bad guy in the upcoming short film “Shhh” that was just recently shot in Orange County and is now in post production.

There is one shoot day left for Spindletop on a location in Kountze. Frederick will then be on the hunt for his next role. 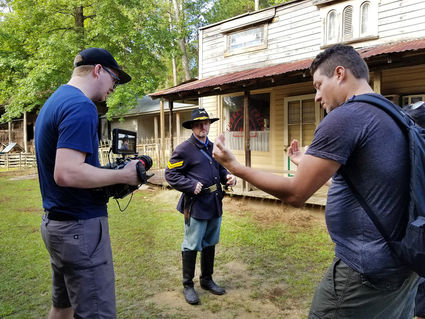