School officials reset after another storm 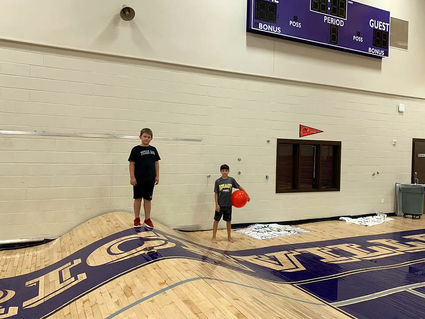 Photo: Students at Mauriceville Middle School explore the ups and downs of water damage left behind by Tropical Depression Imelda in the school gym. PHOTO Courtesy of Little Cypress-Mauriceville CISD.

Orangefield schools officials are hoping the roads are dry for Thursday’s bus runs and school officials at West Orange-Cove and Bridge City are just thankful their schoolrooms were spared water damage.

“While we are very thankful that our campuses were spared from damages, our thoughts are with all of neighboring communities that were not as fortunate,” Bridge City ISD posted on its website over the weekend.

Both LCM and Orangefield were set to resume classes Thursday.

Orangefield ISD was spared flooding at its buildings but had to delay its return to classes from Wednesday to Thursday because of water on roads that caused “significant safety considerations for school bus operations.”

Some students from both Mauriceville Elementary and all from Mauriceville Middle School will be moving into new digs for the fourth time in little over two years Thursday when LCMCISD resumes classes after last week’s Tropical Depression Imelda dropped 20 inches of rain in one 24-hour period.

A massive district-wide school bonds project was nearly complete in the summer of 2017 when Tropical Storm Harvey damaged all but two of the district’s campuses.

After weeks out of school, students attended for only half-days and shared classrooms. Many of the district’s younger students spent a semester in makeshift classrooms at North Orange Baptist Church.

The new plan is for all middle school students to be housed at LCM high school.

Remediators are already drying out MES and MMS and all students are expected back in their original classrooms within six weeks, the district reported.

“As devastating as another flood is to our LCM family and community, we are encouraged that we have been able to get into the schools to rescue as much as possible,” said Sherry Combs, community relations director for the district.

“Since the water was not as high and drained so much sooner than it did following Hurricane Harvey, classrooms have been cleared and much more was able to be saved this time,” she said.

“We are praying for all who have been affected by this flood and are looking forward to getting our students back in class and into a normal routine as soon as possible.”