Wrath over grapes calmed by council 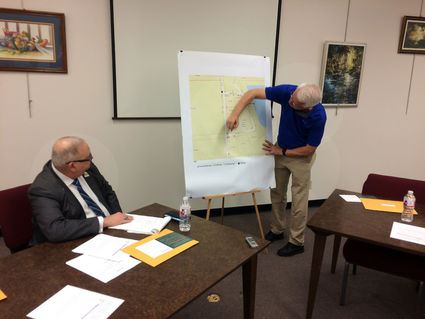 One of Orange’s fastest growing small businesses quickly has fermented into a wrath over grapes.

But a Monday night Orange City Council workshop appeared to chill the whine between the owner/operator of Free State Cellars winery and owners of three neighboring homes.

Neighbors Myra Alexander, John and Susan Shields, and Andy and Simmye Griffin wrote to the city in August requesting a total of 29 “no parking,” “Trucks Prohibited” and 25-mph speed limit signs for the Broadmoor Terrace subdivision.

At the end of Monday night’s special meeting at the library meeting room, the homeowners agreed to three new road signs.

During the meeting, they complained the popularity of the winery that opened at 4702 Tejas Parkway in July had created unsafe driving and parking conditions.

“They have been parking on the street, they have been speeding, and we just don’t want trucks on Lakeshore and Willow Streets,” said John Shields, a homeowner on Tejas Drive.

Lakeshore and Willow Drive join Tejas Drive and Evergreen Drive to make up the small subdivision.

Dana Swope, one of six family owners of Free State Cellars, points out the small mixed-use neighborhood of Broadmoor Terrace has seven residences and five businesses.

“The proposed addition of 29 signs to a neighborhood of seven residences is frankly absurd,” she wrote in late August in response to her neighbors’ request for signs.

Speaking in support of Free State Cellars Monday with Swope, were Robert Curry, a customer; and Jennifer McConnell, whose Tru Colors Art & Design sells T-shirts to the winery.

“It’s an upscale place in Orange we have needed for a long time,” Curry said.

“They support other small businesses in Orange,” McConnell said.

Both in her August letter and again Monday night, Swope explained that parking had been a problem in the early weeks of the winery’s operation.

She said the winery hosted unexpectly large weekend crowds of 150 or so both during pre-opening special events as early as April and through its public opening in July.

That comes thanks to obtaining permission from neighborhood businesses to park cars in their lots during the Friday and Saturday evenings which are the busiest for Free State Cellars.

She said that in July the winery hired Orange Police Capt. Weldon Smith to park cars and shuttle customers from the remote lots in a golf cart she purchased for the job.

“Since they’ve called me to help, no one has parked on the streets,” Capt. Smith said. “I’ve never seen anyone speeding.”

“I am not your enemy here,” Swope said to the neighbors Monday. “I’m not against you. I’m trying to solve problems as quickly as they come up.”

Pullen, a retired OPD commander, explained to residents that parking on the street is not against the law in their neighborhood.

Kelvin Knauf, acting city manager, said the winery has been in existence since before current parking regulations were created in 1984.

Free State Cellars was previously operated as Pineywoods Winery for nearly three decades. The Swope family bought the property in 2016 and turned it from a boutique into an upscale hangout open Thursday through Sunday.

“The issue is that the whole scope of this business has changed,” Susan Shields said. “Mrs. Swope said from the very beginning ‘This is going to be a showplace.’”

John Shields gave an idea of how much bigger.

“When they opened up, everybody had to know this would be a change,” he said. “Pineywoods had a bar that five people – at most – could stand at. No chairs. We knew the whole scope of this would be different.”

The emotionally charged residents had to be asked several times to speak one at a time and address their comments to council, not Swope.

Susan Shields and Simmye Griffin walked out about an hour into the 90-minute meeting.

“I don’t give a damn about your rules,” Andy Griffin said. “I’ve been kicked out of better places than this.”

With council members all offering their services for residents to obtain with a phone call, order prevailed. It appeared most of the summertime problems had been dealt with by the winery.

Knauf said he’d prepare a signage ordinance that included two speed limits signs at the entrance to Broadmoor Terrace at Interstate 10 and exiting the winery, and a stop sign at the corner of Willow and Tejas.

A first reading of the ordinance will be held at the next council meeting in October with a second reading two weeks later.

“None of us are against these people,” Andy Griffin said. “I want this business to be successful. I just don’t want to be affected by it.

“If she starts putting Michelob Ultra Light in her coolers, I’ll come in and drink beer with her.”