When Pastor Keith Royal came out of retirement to join First Baptist Church Bridge City he brought some of the traditions he started at Winfree Baptist Church with him.

October 1 was opening day of First Baptist Church Bridge City’s first Pumpkin Patch. They have wagons available so families can pick out their favorite pumpkin and transport it to the check out line.

The pumpkin patch will run through the month of October. Hours are 10:30 a.m.-7:30 p.m., Monday through Saturday and noon-7:30 p.m. on Sundays. It is located at the back of the church parking lot, adjacent to the church located at 200 West Roundbunch Road.

“We spent Monday unloading an 18-wheeler,” said Segura. All day was spent getting the patch ready for the public.

“They are all different shapes and all different colors,” said Royal. Cost of the pumpkins range from 50 cent to $40. “It goes by size,” he said. “The pumpkins may be a little more expensive here, but it for a good cause.”

“In March we will take about 10 people to the southern region of Honduras to drill a well at a rural village that doesn’t have access to clean, sustainable water,” said Royal.

They hope to raise about $10,000 for the trip. “We may get more pumpkins, depending on how these sell.”

When Royal was at Winfree Baptist Church, they hosted pumpkin patches about 10 times. He brought the idea to the First Baptist members as a possible fundraiser back in April.

“The first time I brought it up I thought, oh they might have to think about it a little bit. They were so excited,” He said. “They immediately started having ideas about how they wanted to do it and they have been very supportive. They showed up yesterday to unload that truck and everyone has just been so excited and supportive.”

He said the last couple of months the planning and preparation intensified. The pumpkins traveled all the way from Farmington, New Mexico.

“They come off of a Navajo Indian Reservation,” he said.

The pumpkins arrived extremely fresh. Royal says it takes three-four days for them to arrive from when they are ordered. “They look really fresh. The stems are nice and green. Most of them will last till the end of the month,” said Royal. “Some will not, especially if they have been banged up in transit, they will start to rot, but most of them are going to last to the end of the month.

“I want to say thank you to the Bridge City High School football team,” said Royal. “I think their coach let them out a little early and they came over and helped us unload these pumpkins. They need a word of thanks.”

This Sunday the congregation will have a church picnic in the patch after services. Royal said the public can join them if they bring their own picnic lunch, to fellowship with church members. 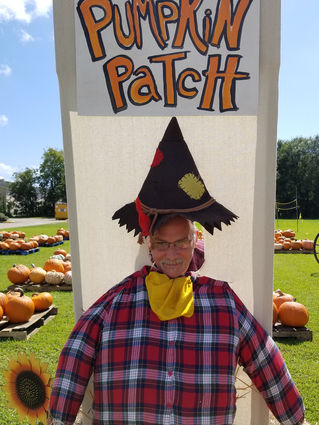 “There will be games, activities and snacks,” said Royal. “There will also be a bounce house and train rides.”

The public is invited to the festival and youngsters are welcome to wear their costumes.

To schedule a pre-K/day care field trip to the patch, contact the church office at 735-3581.