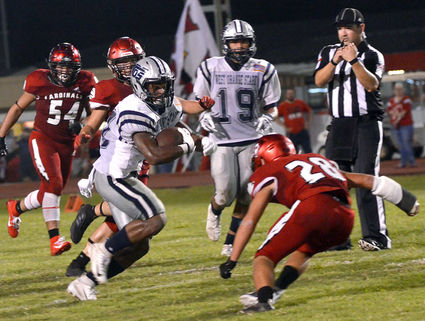 Photo: On his way to the end zone, sophomore Elijah Gales leaves a defender on the ground. Gales finished the game with two touchdowns and 117 yards on 14 carries.

The Bridge City Cardinals were ready and waiting when the Mustangs pulled into town last Friday night, and although it took WO-S a little while to get going, they were the last ones standing when they left town later that night with a 46-7 win.

“I’m elated over the win over Bridge City,” Head Coach Cornel Thompson said. “They came ready to play and we made a lot of mistakes but played much better the second half.”

The Mustangs weren’t able to really get things going until the second quarter when sophomore Jaquailon Chaney broke through the Cardinal defense from 11 yards out and scored. Elijah Gales added another touchdown on the next possession but Bridge City answered back with a touchdown of their own to keep it a close game.

Kicker Angel Ibarra added three points of his own with a 31-yard field goal right before the half. The second half belonged to the Mustangs, as they added 28 points while holding Bridge City scoreless. Jalen Thompson had his first touchdown of the year on a 50-yard pass from quarterback Jerren Terrell. Terrell also scored one of his own from 15 yards out. Gales added his second touchdown of the night on a 38 yard run and senior Terry Harris, who usually plays defense added the last six points. All of Ibarra’s PATs were good.

“Next up is Jasper,” Thompson said. “They are ranked either two or three depending on which poll you look at. They have 30 seniors and I just hope we will accept the challenge because you can bet that they will bring their A game.”

Jasper is 3-1 on the season with huge wins over Bridge City (65-14), Little Cypress-Mauriceville (42-14) and LaMarque (63-6). They lost the weekend of Tropical Storm Imelda to Diboll, 14-9. “We will by far get their best game Friday night,” Thompson said. “I just hope that we accept the challenge and get after it. This game will tell us where we are at. We have to come to play.”

The pre-game program will include a video honoring the legacy of Reggie Garrett and recognition of his family. It will begin at 6:55pm. This is also the Pink Out game and fans are asked to join the school district as they raise breast cancer awareness.

The JV team beat Bridge City last Thursday, 28-0. Scoring for the team were quarterback Dakarion Judge on a two yard run, Jerold Brown on a 45 yard touchdown pass from Demarcus Thibodeaux, Jamaal Shaw on a 25 yard Judge pass and Marqurious Garrett on a 47 yard Judge pass. Christian Quiteno-Polio kicked two PATs and ran in a two point conversion. Offensive standouts were Mak’yan Mickey, Thibodeaux, and Garrett. Defensive standouts were Carmello Jones, Dylan Spencer and Clint Williams. They will play in Jasper this Thursday beginning at 5 pm.