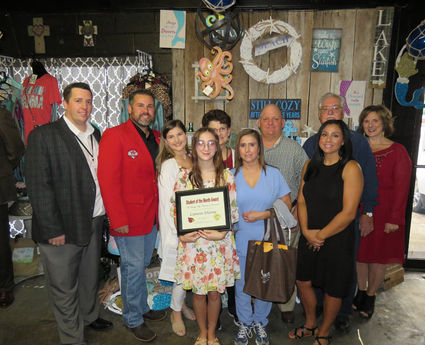 Camren is the daughter of Maricela and Tim Dionne. She is ranked #2 of 177 with a GPA 4.61. Camren’s Awards and Honors include Stark Museum Student Art Exhibition, State Fair Art Exhibition, Excellence of Psychology Award and the Excellence in PreAP World History Award.

Debbie Gregg, Art Teacher, said, “It is my pleasure to praise Camren Dionne on being selected student of the month. She has been one of my students for four years. Camren is so dedicated to her studies and to achieving excellence in all that she does. Her artwork is impeccable. Her work always is to the highest standard of detail. During her Junior year she was not able to be in my Art IV class but she did all of the work as if she was entered in my class which is to be recommended because she was in eight other classes and several were AP. Camren has a wonderful personality and will be successfully at anything she desires.”

Not only is Camren a fantastic student at Bridge City High School taking as many advanced classes as she could, but she is also a great team player.

The University of Texas’s OnRamps program dual enrolled program encourages our students to learn to work effortlessly as part of a team to accomplish common goals.

Camren is a perfect example of the teammate that our OnRamps students aspire to be.

Camren was always prepared for class and could be counted on to contribute valuable insight to the group.

The accolades Camren takes away from her first college class are not only intellectual but also social; I know Camren treasures the friends she made as she “braved the trenches” while earning 6 hours of college credit.

As a naturally creative person, Camren employs the same creative measures when it comes to schoolwork so often her solutions are ingenious.

As Camren does not shy away from obstacles, but confronts them head-on with a confident and "can do" attitude, I am looking forward to watching Camren confront and overcome the new challenges post-graduation will bring to her.”

Cathy Riley, English Department Chair & Director of Bridge City Strutters, said, “Camren is absolutely one of my favorite students because she cherishes academe, and her contagious congenial demeanor as well as strong work ethics are stellar among female students.

One might see Camren drawing her next artistic piece in art class or speaking eloquently as she analyzes an AP novel at a Socratic seminar in English AP class.

I have observed that she opts for the most challenging assignments and projects because that is what Camren loves the most – a challenge.

She challenges herself by taking several AP and dual enrollment courses throughout high school, and her long-term goal is to become a dermatologist.

On behalf of the English Department, I am proud to nominate Camren Dionne as the Bridge City High School Student of the Month.

She demonstrates a positive influence on others uncompromising her morals and integrity and is an outstanding role model for others to emulate.

Camren is currently pursuing a Pharmacy Technician certification at Lamar State College Orange. After graduation she plans to attend Lamar University, obtain her Pre-med basics and then become a dermatologist.