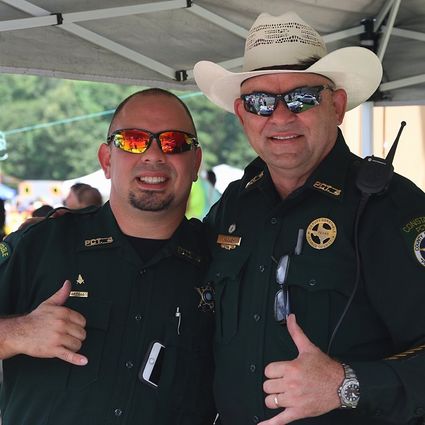 Constable Lane Mooney, left, and Deputy Constable Matt Ortego have worked together in the Precinct 4 office.

Orange County’s newest commissioner and a four-term judge at-law face competition next year and a candidate for constable brings light to a quirky law.

* Retired chemical plant shift coordinator Carl LeBlanc is taking on Precinct 3 Commissioner Kirk Roccaforte, who was appointed to the position in July to replace John Gothia, who became County Judge.

Johnson, Roccaforte and Precinct 1 Constable Lannie Claybar also recently filed the paperwork naming campaign treasurers, which is required before a person can declare their candidacy and begin soliciting campaign donations.

Ortego, 34, is signed up to run for the office currently held by Lane Mooney, whose first term in the Precinct 4 Constable’s office doesn’t expire until Dec. 31, 2020.

Texas Election Law requires a local office holder to resign before running for a new office if the amount of time left in the existing term is more than a year and 30 days.

Former Port Arthur Mayor Derrick Freeman lost his seat as a city councilman when he announced his run for mayor more than a year, 30 days before the next election.

“Lane Mooney is not going to be running for constable,” said Ortego. “I was highly encouraged by Lane Mooney to run for the job.”

Word around the county for months has been that Mooney, a former Sheriff’s deputy, intends to run for Sheriff. Keith Merritt, current Sheriff, has indicated he’s retiring after 2020.

“I’m contemplating it,” Mooney told The Record Newspapers. “There are some timelines. An elected official cannot announce more than a year plus 30 days out.”

In order to get on an official ballot, candidates must register with their county party between Nov. 9 and Dec. 9.

Ortego worked as a corrections officer in Jefferson County before working for former Precinct 4 Constable Weldon Peveto as a reserve officer. He worked for Vidor ISD’s Police Department, then as deputy sheriff in Newton and Jasper Counties, rising as high as patrol lieutenant. He now teaches criminal justice at Silsbee High School and works for Mooney as deputy.

Marion, 51, is a former detective and chief deputy at the Orange County Sheriff’s Office who has spent the last 11 years practicing law either in private practice or as an assistant county attorney.

He is currently chief felony prosecutor in the 260th District Court and the father of four says his primary interest is in the area of juvenile justice, a feature of the At-Law courts.

“I always like working with kids and this will help me do more to change the kids to not spend the rest of their lives in the justice system,” Marion said.

He said as a third-year law student he interned in the Orange County District Attorney’s office and picked the first jury before newly appointed judge, Troy Johnson, in the County Court At-Law #2.

“I was a prosecutor in that court for four years, too, when I was here the first time [a 2008-2011 stint as assistant county attorney].

“This is nothing toward Judge Johnson. We’ve been friends for many years and I hope we can stay friends forever. But it’s time for a change, and I’d like to be that change.”

LeBlanc, 62, is a Bridge City High School grad who went to work for Gulf Oil in 1977 and recently retired as shift coordinator from the company now known as Chevron Phillips Chemical.

He has been a regular at commissioners’ court meetings for months.

“Even before I retired, I came to a lot of commissioners’ meetings, and now that I’m retired, it can be my full-time job.

“I’m not a politician. This is my first run for office. I just think there needs some change in this county.”