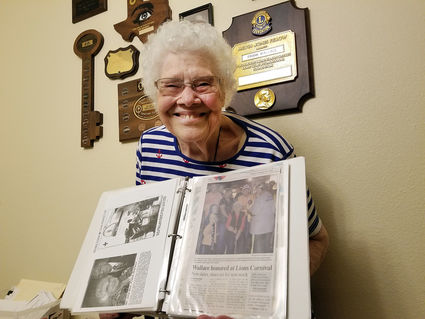 Photo: Addie Wallace poses with what is left of her Lions Club memorabilia after Harvey. She was honored last year for her years of service to the Lions Club. She helped Pat Appel develop the original popcorn ball recipe that was used in the past at the Lions Club Carnival.

The Lions Club Carnival is filled with tradition and has delighted children for over 70 years. The delight continues starting tonight as the carnival begins its annual two-week run.

A favorite tradition that has been missing for a few years is rumored to be returning…popcorn balls.

Due to a scheduling conflict we weren’t able to get the skinny on the return of the delicacy before press time, but we did find out about the origin story of how popcorn balls first came to the carnival from 92 year old Addie Wallace.

Wallace was a long time volunteer at the Lions Club Carnival. She ran the popcorn booth with her best friend, Pat Appel, and a few other volunteers for many years. In fact, last year’s carnival was dedicated to Wallace and her late husband, Frank.

It started on a rainy, carnival night, of which there have been many through the years. There was so much popcorn left over at the end of the night, they didn’t want to waste it, but then again, it couldn’t be sold the next night because it would be stale. It was a problem they frequently had. Their solution was the popcorn ball. It took a while to get the recipe down.

“If you get them too sticky or not enough, they fall apart,” said Wallace. “It depends on the amount of marshmallow.”

Wallace doesn’t remember the exact proportions they came up with. The original recipe was lost in Hurricane Harvey and Wallace hasn’t been able to get in touch with Appel to see if she still has the recipe.

Wallace said she remembers it was one stick of butter, but she doesn’t remember how many marshmallows.

“I don’t know if we used the large marshmallows or the small marshmallows,’ said Wallace. “I had a pan that was so big…” as she motioned with her hands indicating a width of about eight inches. Their recipe was developed according to the pan size they had.

She said the popcorn balls sold quickly every night. Many people bought multiples. They began over popping on purpose to have more popcorn for balls. Many days they would make 100 or so.

When the pair retired from the carnival, the popcorn balls fell by the wayside, but they are making a comeback.

“Popcorn is one of the best sellers,” said Wallace. “That nice aroma draws them in.”

Of course that isn’t the only food that can be found at the carnival. Don’t forget to try one of Uncle Larry’s famous hamburgers. There are also other fair favorites such as funnel cakes, cotton candy caramel apples, chocolate covered strawberries, corn dogs, turkey legs and more.

The goldfish booth is one of the favorite games, along with the dime toss, football toss and don’t forget to play LIONS, their version of Bingo.

Rides for kids of all ages include the Ferris wheel, Tilt-a-Whirl, Merry go round, the kiddie cars and train.

Rides are 1 to 2 tokens. Tokens can also be used to play games and purchase food. Tokens are $1 each.

Wallace continues to live on her own in Orange and doesn’t plan on moving to an “old folks home” anytime soon. “When you find me putting my shoes in the refrigerator, then it’s time,” she said.