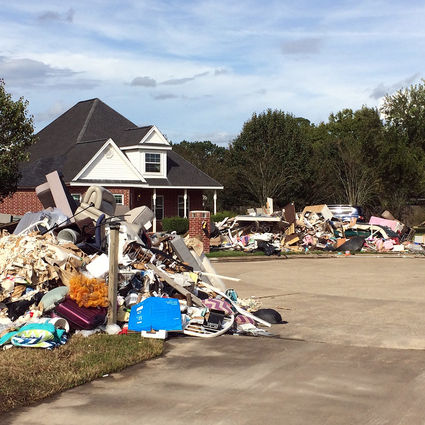 Photo: Debris from Tropical Storm Imelda is piled high at the curbs on Michelle Street, west of Vidor, Tuesday afternoon.

He asked for homeowners to be patient. And be safe.

“We’ve got some neighborhoods where the debris piles are so high along the streets that it’s pretty much tunnel vision [for motorists and pedestrians]. Be careful out there.”

Be patient, because the federal government has yet to declare a Public Assistance emergency, which is needed to assure government reimbursement for debris cleanup.

In the meantime, Orange County jurisdictions are getting by with their local workers and a big hand from the Texas Department of Transportation.

Joel Ardoin, county emergency management coordinator, reported that the Orange County Road & Bridge Department had by the end of Monday picked up 94 loads with its grapple trucks, a total of 252 cubic yards of Sheetrock, insulation and personal belongings ruined by the Sept. 17-18 storm that dumped as much as 40 inches of rain on Southeast Texas in a 24-hour period.

But he estimated that in the entire county, there were as many as 250,000 cubic yards needing pickup.

He said that FEMA officials had certified about 2,300 homes in Orange County had major flood damage. Of that, Ardoin said as many as 1,700 of those homes were in the Vidor area.

“The worst damage was in the central point of the county, in the Orangefield school district and up FM 1442 westward, as well as Mauriceville,” he said.

Ardoin said that as of Tuesday, there were about six to eight double-hauler trucks picking up debris in the county.

Citizens are reminded that debris needs to be placed on the road side of drainage ditches and not in a roadway if humanly possible.

TxDOT is only making one pass through the county’s roads and streets, Gothia said.

A quick check with the cities of Bridge City and Orange Tuesday revealed their public works officials have already cleaned up the limited debris in their city limits.

“We got lucky in Bridge City. We only had about four homes get flooded and the debris is gone,” Mike Plumb said.

“We’ve got it all picked up, that we know about.”

Ardoin said about 40 homes in the city of Orange flooded.

Orange County has contracts with debris hauler AshBritt and monitoring service TetraTech, but currently plans to only use them if FEMA gives the go-ahead to offer reimbursement to local governments.

“We’ve reached the threshold for the number of homes affected for FEMA to grant Individual Assistance to homeowners but the state of Texas needs to show $37.6 million in damage to public structures.

Without FEMA’s help paying for debris removal, the county will have to spend out of its contingency funds, also known as the Rainy Day Fund.

All debris picked up by the county goes to the county landfill temporarily but ultimately will be compacted and trucked to the Waste Management landfill in Newton County.

Ardoin said Waste Management is charging the county $8.44 per cubic yard to allow the storm debris at the Newton County landfill.

The good news is that the Orange County Convention and Expo Center is playing home to a FEMA Disaster Recovery Center, a federal Business Recovery Center and a Red Cross processing center.

The DRC is open from 7 a.m. to 7 p.m. seven days a week to assist people registering and filing for FEMA Individual Assistance.