The Bridge City Cardinals got out front early against Little Cypress-Mauriceville but couldn’t hold on as the Bears rebounded in the second half for a 26-14 win in the district opener for both teams.

The Bears opened up the scoring when Ethan McCollum took off on a 45-yard touchdown run. With the extra point kick by Robby Wedel, LC-M led 7-0.

On the ensuing kickoff return, Ethan Oceguera took the ball back to the LC-M 32 yard line where the Cardinals would set up for its first offensive possession. It took just four plays for Oceguera to cross the goal line and with the Oscar Carranza extra point kick, the game was tied 7-7.

Oceguera would cap a 13-play drive for the Cardinals in the second quarter when he crossed from the six yard line, giving Bridge City a 14-7 halftime lead.

Twice on its first possession of the second half, the Bears had to convert on fourth-down situations to keep their drive alive. McCollum would make the second one count when he took off from 21 yards out for the score and a 14-14 tie game.

The Bears would go up 20-14 when McCollum scored yet again. With Bridge City driving for the chance at a possible go-ahead score, LC-M’s Ken’teon Champine picked off a BC pass to end the threat.

McCollum would score again, this time with under two minutes to play. Another missed extra-point kick left the Bears up by 12, 26-14, but it was enough.

The Bears travel to face Splendora this Friday as they continue district play, while Bridge City faces Huffman in the Cardinals’ homecoming showdown.

West Orange-Stark outlasted Silsbee 17-9 in a nail-biter at Tigers Stadium this past Friday night as the Mustangs put together a second-half rally to take the district victory.

The Mustangs fell behind 7-0 to the Tigers and stayed there until midway in the third quarter when Elijah Gales took over to help WO-S to its first points of the night.

JaQuailon Chaney took it in from there and the Angel Ibarra extra point kick tied the game at 7-7 with just over half of the third quarter left to play.

Jadon Jones picked off a Tigers’ pass on the next possession, one of two for him on the night, and then Gales took it to the 3. A tackle for a loss and then a run by Jerren Terrell put the Mustangs at the Tigers 11 yard line.

Terrell then found Jayson Zeigler Jr. on a touchdown pass for a 14-7 lead with just under a minute left until the fourth quarter.

Jones got his second INT of the game, setting up another Terrell-Zeigler TD pass completion, this one for 23 yards and a 17-7 advantage on the scoreboard.

The Tigers’ final two points came when Terrell took an intentional tackle in the end zone as time ran out.

The Mustangs get a bye week this Friday before returning to district play next week.

The East Chambers Buccaneers came to Orangefield with ruination on their minds.

When the final seconds ticked off the clock, the Bucs not only ruined the Bobcats’ homecoming celebration but their undefeated streak as well.

EC came away with a 28-23 win over the Bobcats at F.L. McClain Stadium this past Friday night after holding off Orangefield late in the game for the win.

Orangefield got on the scoreboard first when Gunner Jones booted a 22-yard field goal for a 3-0 advantage.

In under a minute, the Buccaneers came back to score when Nolton Shelvin ran 64 yards for a TD and a 7-3 lead for East Chambers.

After a lengthy drive on the Bobcats’ next possession, Hunter Ashworth finished off the offensive push with a 2-yard run for a TD. The two-point conversion failed and the Bobcats held a 9-7 lead.

The Bucs went up 14-9 when Sholvin pushed across from the 7-yard line before the halftime break.

In the opening drive of the second half, the Bucs scored again with Ceasar running in from 16 yards out for a 21-9 advantage.

The Bobcats then started their attempt at a comeback to maintain their undefeated streak. Moving 60 yards on its next possession, Orangefield found the scoreboard again when Chase Broussard crossed from 11 yards out to cut the EC lead to 28-16.

On the next Orangefield possession, Broussard scored again, this time from the 8, to cut the Bucaneers lead to 28-23. 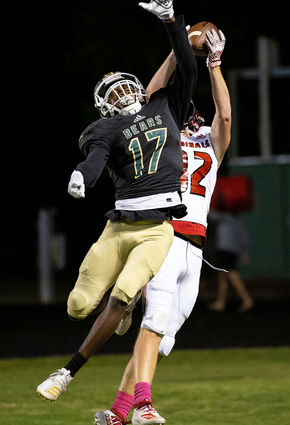 Bridge City Cardinal receiver J.T. Fielder comes down with the ball behind the tight defense of LCM Bear defensive back Ken'ton Champine. LCM won the district opener over Bridge City 26-14.

Orangefield’s defense stood up on a fourth-down attempt by East Chambers, giving the Bobcats offense the chance for the comeback victory.

Facing fourth down with little time left on the clock, Orangefield turned it over on downs as EC escaped with the win.

Broussard led the Bobcats on the ground with 74 yards on 17 carries, while Hester Puckett had 62 yards on 15 carries. Ashworth collected 55 yards on eight carries. Jones completed 2 of 7 passes for 10 yards passing.

The Bobcats travel to Hardin this Friday to face the Hornets in district play.