Orange Lions in long time service at the carnival

Photo: John Martin has volunteered at the Lions Club Carnival since 1966. He is the chief mechanic in charge of keeping all the rides in working order. RECORD PHOTO: Penny LeLeux

There are six members of the Orange Lions Club that have volunteered at the Lions Club Carnival for 40 or more years each. Between them, they have been serving kiddies burgers and snow cones, helping them on the Merry Go Round or making sure the rides were safe for well over 250 years between them.

The youngster, volunteer wise, is Stump Weatherford. This is his 40th year. Dan Mohon and Randall Morris come in at 45. Larry David has 47 years under his belt. John Cochran has been a Lion serving the carnival since 1971. The longest volunteer and the head mechanic that keeps the rides in top condition is John Martin with over 50 years of service. John said he started volunteering in 1966.

“It is an honor to work alongside these Lions who have helped make our club what it is today,” said Orange Lions Club president Chris Kovatch. “Their commitment to our community is what Lionism is all about. They are true assets to our club and our city.”

What has kept Martin volunteering all these years?

“I guess I just enjoy the camaraderie down here, as well as what we do for the community, is what I really enjoy. Knowing what we make goes to charity,” he said.

Martin said he started out working on a ride they referred to as the ‘Vomit Comet.’ “It had about six gondolas. The kids could spin it. It would hold about six kids.” Martin ran it for seven or eight years, then he moved to the Farris Wheel.

“Lee Roy Boehme had the Farris Wheel. He had been in the club as long as I had. Lee Roy was probably one on the best mechanics that I have ever known in my life. I was a mechanical engineer for him. He was the best I ever worked with,” said Martin. Boehme passed away several years ago from Alzheimer’s and Martin took over the maintenance of the rides. They named the current Farris Wheel for Boehme, before he passed. “We call it the Lee Roy.” There are even words welcoming you to the “Lee Roy” on the steps leading to the loading platform.

Boehme actually found the current Farris Wheel in Chicago after the other one was damaged by a hurricane. Martin said they worked on it for a year to get it ready for its first carnival.

Dan Mohon has 45 years perfect attendance as an Orange Lion. He said he joined the club about three months after he moved to Orange and has been volunteering ever since.

“It’s just a fantastic event for Orange County. “I’ve been doing the Coke and soft drink both for at least 25 years” Mohon said he will keep volunteering as long as his health is good. “This is not a hard booth, because we have so many volunteers.”

“I joined in 1978,” said Weatherford. “There have been a lot of changes that we’ve made in our carnival.” He loves how the people support the carnival so they can give back to the community. “It’s been a great ride, it really has,” he said. 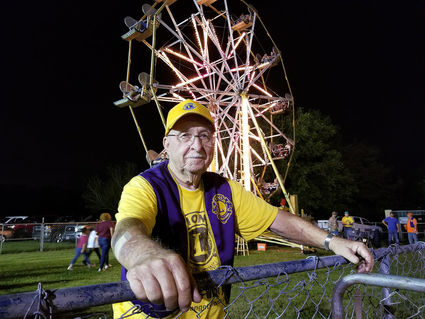 John Martin has volunteered at the Lions Club Carnival since 1966. He is the chief mechanic in charge of keeping all the rides in working order. RECORD PHOTO: Penny LeLeux

He keeps coming back to “see the smiles on the people of the community and see the little kids, knowing the money goes to the Texas Lions Camp for the handicapped and diabetics.” Weatherford stated the funds raised also supports the Lions Eye Bank which addresses vision problems.

Although not all the volunteers mentioned were available for interview The Record Newspapers wishes to acknowledge their service to the community.

The Lions Club Carnival continues this week through Saturday, opening at 6:30 p.m. each day. Note that Lions Bingo, which is usually available each night, will only be available Friday and Saturday due to a licensing issue. Admission to the carnival is $3 for adults, teens 10-17 are $2, 10 and under are free. Tokens are $1 each, rides or one or two tokens.