The Bears topped Splendora 34-27 after holding off a late charge by the Wildcats.

Carson Peet got the momentum shifted into LC-M’s direction early on, intercepting a Wildcats pass and returning it to the 19 yard line. Bears quarterback Ethan McCollum finished the job several plays later when he crossed the goal line from the 6 yard line for a 7-0 lead.

Splendora tied the game at 7-7 on its next possession.

Peet was at it again after a great punt return to give the Bears great field position. After a huge gainer by D.J. Williams, McCollum took the ball from the 17 for a 14-7 LC-M advantage.

With Splendora driving, Williams intercepted a pass, taking it the distance for a 65-yard INT touchdown, giving the Bears a 20-7 lead at the half.

McCollum proved himself a hero once again on the first drive of the second half. After fumbling the snap, he picked it up and took off for a 37-yard TD run and a 26-7 lead.

The Bears scored again on its next possession when McCollum tossed a pass into the end zone with Brandon Pollack hauling in the scoring strike for a 34-7 lead.

Splendora made a game of it, capitalizing on a couple of LC-M turnovers to close the gap to the 34-27 final.

McCollumn completed 12 of 20 passes for 144 yards while running for another 84 yards on 19 carries.

The Bears welcome the Livingston Lions this Friday.

The Orangefield Bobcats moved to 3-1 in district play after topping Hardin 21-6 this past Friday night.

Three different Bobcats found the end zone as they worked to hold off the Hornets for the league win.

Kent Michael scored first on a 10-yard run for a 7-0 lead in the first quarter. In the second quarter, Chase Broussard made it 14-0 on an 8-yard run. The final score for the Bobcats came in the fourth quarter when Hunter Ashworth cross the goal line from the 12 for the 21-6 final.

The Bobcats will host Woodville this Friday night.

After just six minutes of the first quarter, the Bridge City Cardinals knew it was going to be a long night.

Huffman scored 20 quick points to start the game this past Friday night, eventually walking away from the Cardinals’ homecoming game with a 44-21 victory.

The Falcons scored on a fumble return, then an interception return before its offense put points on the board with a 45-yard touchdown run to take a 20-0 advantage.

The Cardinals were down but not done, collecting a fumble at midfield then marching the field for their first score. Andy Lara took the ball across from the 7 yard line with Oscar Carranza booting the extra point for a 20-7 difference.

The Falcons responded with a potent offensive drive that spanned 76 yards. A two-point conversion helped make up for a missed PAT kick earlier and the Falcons led 28-7 at the halftime break. 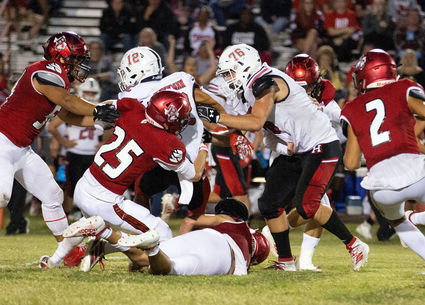 The Cardinals kept the game within reach when Dorian Pruitt intercepted a Falcons pass, setting up a TD drive. Jackson Tims took a short pass from quarterback Ethan Oceguera then went 64 yards for the touchdown.

Huffman extended its lead over the rest of the second half, taking a 44-14 advantage into the final minute of play.

Tims scored again with 11 seconds left in the game when he pulled down a 5-yard pass from Oceguera. Tims finished with 112 yards receiving on five catches.

The Cardinals moved to 1-6 overall and 0-2 in district play with the loss.