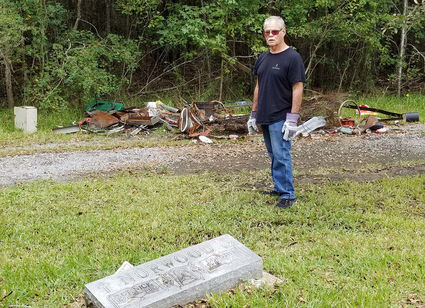 Photo: Jim Brown is pictured with the scrap metal and trash someone dumped at Bland Cemetery. Record Photo: Penny LeLeux

Duane Armstrong and Jim Brown are dismayed that someone dumped a pile of scrap metal and other trash in the Historic Bland Cemetery in Orange recently.

“This makes no sense as the landfill is right over there on 1442,” said Brown. He noted the county landfill is currently open and free from charge to anybody that lives in Orange County due to the recent flooding from TS Imelda.

“It’s a shame when you try to keep something up,” said Armstrong. He, Brown and a few others worked for two years to clean up the cemetery after Hurricane Rita.

“It was decimated,” said Brown.

The pair, along with others, has looked after the family cemetery for a few years now. Before that, it really wasn’t maintained, so there would be squares mowed and other parts not. Now they have an official cemetery association, so there is a $500 one time burial charge that covers the cost of having the cemetery mowed twice a month.

“Then you have somebody that comes along and does something like this,” said Brown about the dumping situation. “We’ve had our share of incidents.”

Once, somebody dumped a dog at the cemetery. It lived in the cemetery for about a year, until being adopted by the owners of a nearby business. Brown said the dog was white and they named it “Ghost.”

Brown said the dog protected the cemetery and kept mischief makers away. Armstrong said sometimes Ghost would lie on the concrete slab of a grave and looked like a statue.

Brown said the cemetery has a Texas historical marker and is filled with the descendents of Peyton Bland and Jean Baptiste Peveto. According to Brown, six of Peveto’s sons married six of Bland’s daughters or granddaughters.

Over 70 veterans are buried in Bland Cemetery dating all the way back to the Civil War. Peyton Bland fought in the Battle of San Jacinto in the Texas Revolution, which predates the Civil War, but he is not buried in the Cemetery. He died in Wharton County and was buried in an unknown grave. His son-in-law John Dobbs was the first person buried in the cemetery. Dobbs was shot in the head over a political dispute.

“We have a lot of history here,” said Brown. “Believe it or not, we have over 400 graves here. We have a pretty good record of who all is buried here.”

There are also several constables and lawmakers buried in the cemetery. That should give those that desecrated holy ground with trash pause to consider their actions. Those on the other side are not bound by the laws of this plane. It may be more than Orange County law enforcement looking for the perpetrators.

“For me, I don’t believe in ghosts. A lot of people do and they report seeing things and taking pictures of orbs out here,” said Brown. “I’ve never looked in a paper and seen where a ghost has killed 12 people, so I’m not worried much about it, however, I’ve had reports of strange things and people walking around out here. I go to bed early so I’m not here when they’re out I guess,” Brown laughed.

Those dumping trash in the cemetery should heed their actions even if they aren’t afraid of ghosts.

“We are planning to get some of those game cameras to put out,” said Brown. If they get evidence of who is dumping in the cemetery it will be turned over to the Orange County Sheriff’s Department

For anyone wanting more information on the Bland Cemetery, historical or otherwise, there is a Facebook page.