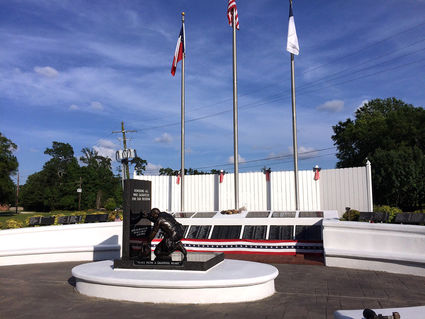 Cedric Stout of Bridge City, one of a handful of living sailors who survived the Japanese attack on Hawaii’s Pearl Harbor Naval Base nearly 78 years ago, turns 98 years old this week.

At their weekly meeting in downtown Orange, commissioners declared Tuesday “Cedric Stout” Day to honor the father of nine who was aboard the U.S.S. Utah when it was strafed and sunk by Japanese torpedo bombers at sunrise Dec. 7, 1941.

The surprise aerial attack that killed nearly 2,500 sailors and civilians brought the United States into World War II as Congress declared war the next day.

The Greater Orange Area Chamber of Commerce ($100,000) and the Orange County Economic Development Corporation ($50,000) took home the lions’ share of the county’s HOT funds, which should go without saying.

The EDC won the money for billboard advertising.

The county collects HOT funds as a tax on hotel and motel room nights to spend on organizations and activities that bring visitors to town to stay in hotels and motels.

Orangefield’s Cormier Museum was granted $8,000, while Music By The Stars landed $7,500. Both Gulf Coast Cajuns and HamFest each won $6,000 grants.

Q’ing For A Cause was granted $3,000, as was the Orange County Livestock Association.

In other business, the county approved monthly treasurer’s reports that noted $331,000 in interest earned for the month ended Sept. 30, with $22.6 million in pledged security collateral, and paid weekly bills totaling $283,252.

Commissioners agreed to contracting out mowing around county buildings, and the one-year contract worth up to $81,000 to Lightfoot Enterprises will free up two county maintenance employees for more urgently needed chores, Maintenance Director Kurt Guidry explained.

Those workers have been busy lately repairing county buildings, such as those at Claiborne West Park and Vidor’s Raymond Gould Park.

The Sheriff Office may be able to move its substation back to Vidor now that the state has eliminated the Vidor Adult Probation Department in a cost-cutting move, commissioners were told.

Gothia reported that Joel Ardoin, county emergency management coordinator, was in a regional meeting with FEMA Tuesday as the 13 counties affected by Tropical Storm Imelda put together an appeal to be granted Public Assistance from the Feds.

The judge also reported that debris pickup continues, with 13,666 cubic yards hauled from Vidor and 26,733 from the rest of the county.

“They’re making real good progress,” Gothia said. “And I think they’ll continue as long as we have good weather.”