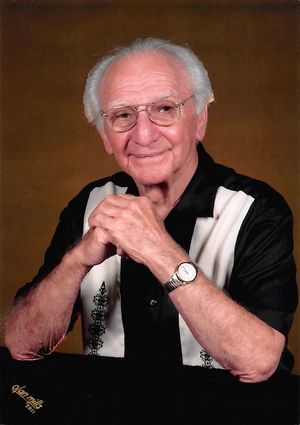 Prior to the Mass held at St. Henry Catholic Church on Monday, visitation will be open at Claybar Funeral Home in Bridge City from 11:00 a.m. to 1:00 p.m.

A Mass of Christian Burial will be held at 2:00 p.m., Monday, November 11, 2019, at St. Henry Catholic Church in Bridge City with Father Steve Leger officiating. Burial will follow the service at Hillcrest Memorial Gardens Cemetery.

Born in Port Arthur, Texas, on April 27, 1933, he was the son of Joseph Salazar and Virginia O’Quinn Salazar. Raymond proudly served his country in both the United States Army and the United States Air Force. He retired as an Insulator after 37 loyal years with Gulf Oil. Whether it be softball, baseball, horseshoes, rabbit hunting, or even playing washers, Raymond loved sports and getting to spend time with his family. He enjoyed performing Vaudeville Acts and dancing any chance he got. He was always around to help anyone who needed it with a smile on his face. Raymond adored his family and will be missed by all who knew and loved him.

He was preceded in death by his parents, Joseph “Joe” and Virginia Salazar; son, Raymond Salazar and David Salazar; 4 brothers; and 5 sisters.

Those left to cherish his memory include his loving wife of 67 years, Barbara Ann Salazar; daughters, Ramona Louise Fullerton and Mike, of Bridge City and Rhonda Lorayne Wells and Scott, of Bridge City; grandchildren, Edward Lisotta, Erin and Freddie Guerra, Kayla and Randy Verdin, Raygon and Garrett Gibbs, Chris and Carol Wells, and Ashley Wells; and his great-grandchildren, Ambreah, Katherine, Landon, Alaina, Abbie, Brady, Savannah, and Ryan; along with numerous other loving family and friends.

In lieu of flowers, the family requests that memorial contributions be made to St. Jude Children’s Research Hospital or to any children’s hospital of your choice.

Mr. Salazar’s family would like to extend a heartfelt thank you to the staff of Bonne Vie for the compassionate care they showed him during his stay.