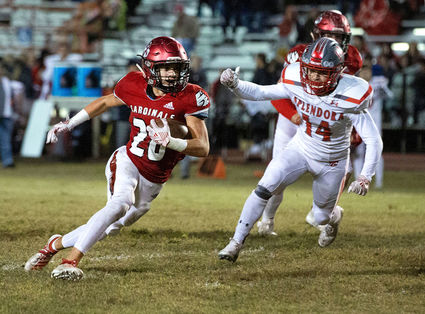 Photo: Bridge City Cardinal Jackson Tims wrestled down a Splendora ball carrier during Big Red's 24-20 victory propelling them to the playoffs against the Navasota Rattlers on Friday.

The West Orange-Stark Mustangs are in familiar territory as the 2019 regular season ends, taking home the District 10-4A, Division I championship with a 42-7 shellacking of Hamshire-Fannett this past Friday night.

The Mustangs, who finished the regular season 7-1 overall and 4-0 in district play, will take on Huntington this Thursday at 7:30 p.m. at Beaumont ISD Memorial Stadium. The Red Devils are in the playoffs in spite of their 1-9 and 1-3 records.

Hamshire-Fannett actually held an early lead, 7-0, before the Mustangs finally kicked into gear to eventually take a 14-7 lead at the half.

WO-S marched 60 yards in four plays, capped by a 25-yard touchdown run by Elijah Gales that tied the game at 7-7.

After a muffed punt by H-F later in the first quarter, the Mustangs took advantage for another touchdown when Jerren Terrell hit Jalen Thompson for a 16-yard pass-and-run and a 14-7 halftime lead.

The Ponies made quick work on offense at the start of the second half when Terrell hit Jayson Zeigler for a 32-yard touchdown off the screen pass for a 21-7 lead.

Thompson added a touchdown for the Mustangs on defense when he picked off an H-F pass for a 52-yard return and a 28-7 advantage midway through the third quarter.

With just seconds left to play in the third quarter, Gales finished a 57-yard, four-play drive with an 18-yard scoring run. The Mustangs led 35-7 heading into the fourth quarter.

Midway through the final quarter, WO-S strung together an eight-play, 52-yard drive with Zeigler going in from 30 yards out for the final 42-7 margin.

Terrell finished the game completing 6 of 15 passes for 134 yards and two TDs while Thompson led all receivers with 52 yards on three catches. Gales had 75 yards on 10 carries and Zeigler finished with five for 53 yards.

The Orangefield Bobcats clinched the second-place spot in District 12-3A, Division I with a convincing 42-19 win over Anahuac this past Friday night.

That puts the Bobcats, 9-1 overall and 6-1 in district play, in a bidistrict round game against Franklin this Thursday at 7 p.m. at Woodforest Bank Stadium in Shenandoah. The Lions finished their season as the third place team out of District 11-3A, Division I with records of 6-3 overall and 4-2 in league play.

Anahuac went up by a touchdown early but Orangefield would answer quickly, tying the game at 7-7 when Clayson Choate took the kickoff 84 yards for the score.

After a failed fake punt attempt by Anahuac on its next possession, the Bobcats put their heads down and bulled forward for a drive to the Panthers 11 where Chase Broussard would do the rest to give the Cats a 14-7 advantage.

The Bobcats upped their lead to 21-7 when Gunner Jones sprinted 13 yards for a touchdown, and then Choate picked off an Anahuac pass, returning it 47 yards for a 28-7 advantage. Before the half would end, Jones hit Broussard in the end zone with a 16-yard pass and a 35-7 lead going into the locker room.

The Panthers finally found the scoreboard again on a pass play to close the gap to 35-13 but the Bobcats had an answer with a strong offensive drive was capped by Kadeon Evans’ 3-yard TD run and a 42-13 lead.

Anahuac added another TD late in the fourth to close the gap to the final 42-19 margin.

Orangefield’s Ashworth finished with 12 carries for 65 yards while Broussard had 13 carries for 64 yards. The Bobcats defense allowed just 20 yards on the ground by the Panthers.

It took a second-half comeback and an overtime period for Lumberton to beat Little Cypress-Mauriceville 20-14 this past Friday night.

In spite of the loss, the Bears advance to the Class 4A, Division I bidistrict round where they face the 5-4 Stafford Spartans this Friday at 7 p.m. at Ray Maddry Stadium in Channelview.

LC-M dominated the first three quarters of the game, going up 14-0 entering the fourth. The Bears marched 60 yards in seven plays to take a 6-0 lead in the first quarter. Ethan McCollum hit DJ Spears for 23 yards and a touchdown for the lead.

In spite of some back-and-forth on the line of scrimmage thanks to several penalties, the Bears finally got back into the end zone in the second quarter when McCollum hit Brandon Pollack from the 6 yard line. A two-point conversion pass from McCollum to Williams put the Bears up 14-0.

In the fourth quarter, Lumberton managed to not only match the LC-M score on the board with two touchdowns to tie the game at 14-14 but the Raiders defense wouldn’t allow another point to the LC-M offense.

In the overtime, the Bears tried an option pass that was intercepted by Lumberton. A half-dozen plays later, the Raiders were in the end zone for the winning touchdown.

In a season of struggles, the Bridge City Cardinals proved that perseverance pays off.

The Cardinals, 3-6 overall and 2-3 in District 11-4A, Division I play, earned a playoff spot after a 24-20 win over Splendora this past Friday night at Larry Ward Stadium.

The Cards needed Lumberton to win over Little Cypress-Mauriceville and the Raiders obliged with an overtime victory that helped catapult BC into the postseason. The Cards now take on the 6-4 Navasota Rattlers at 7 p.m. this Friday at Huffman Falcon Stadium.

Bridge City and Splendora battled back and forth this past Friday with the Cardinals scoring on an Oscar Carranza field goal for a 3-0 early lead. After a Splendora touchdown that gave the Wildcats a 6-3 advantage, BC’s Andy Lara found the end zone to retake a 10-6 lead. Again, Splendora responded, going back out front 13-10.

The first half ended on a positive note for the Cardinals as Rylan Ply gave BC a 17-3 lead on a 3-yard touchdown run.

The Wildcats answered in the third quarter with a touchdown for a 20-17 lead. It was Ply who put the Cardinals back out front for good as he ran 85 yards for a score and the 24-20 final.