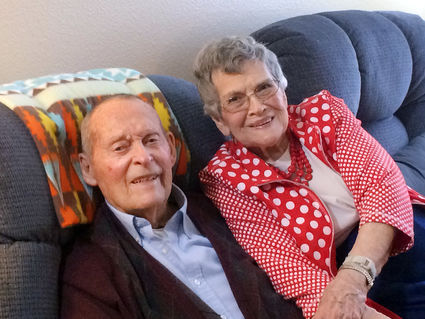 Photo: Orangefield native Stanley Simon returned from World War II and found his reward in the arms of Gladys. The couple marked 73 years of marriage on Nov. 9, 2019.

Gladys Simon remembers where she was the first time she saw her husband. And his memory is as sharp as a tack on that subject.

“Oh boy,” Stanley Simon exclaimed, his eyes lighting up. “Yeah, I said, ‘I want to date her.’

“She was a beautiful woman, was very well educated and was real smart, I guarantee.”

But Gladys, who can tell you what outfit she was wearing and how her hair was styled back on that day in mid-1946, has her own recollections of that day.

Back then, Stanley was 25. He had just gotten out of the U.S. Army at the end of World War II, duty that included landing at Omaha Beach and suffering frostbite at the Battle of the Bulge.

“I was living with my Aunt Juliet in town and working at Texaco Island at their [oil] canning factory,” Alice said recently. “I was working to make money so I could get into nursing classes at St. Mary’s.”

Both Stanley, a native of Orangefield, and Gladys, who grew up “way out in the country” in Port Acres, were boarders when they met.

Stanley was living at “Mom Gibbs’” boarding house that summer but was in Gladys’ neighborhood that day because he had a job painting his sister Stella’s nearby garage.

“I was on my aunt’s front porch on 10th Street and he’d come by in his car,” Gladys said.

Later that evening, Stanley returned to the neighborhood. This time, he asked Stella to introduce him to “that gal over at Juliet’s.”

“Oh, I used to pout a lot when we got married. I remember I was big and pregnant with Charlotte [their first of four daughters] and he danced with his niece, Jeannette. I was jealous.

“He asked me if I’d like to go dancing,” Gladys remembers. “We found out we could jitterbug, ballroom dance and slow dance. We used to go to the American Legion Hall on Lakeshore Drive.

“Our favorite song was ‘Stardust.’”

“Every time we hear it,” Gladys said, “we think how we used to dance for it.”

Today, the two reside in a retirement home in Beaumont and the moving is a tad slower. Both survived health scares this past spring. But they participate in regular activities, such as bingo. And each week, they are readers during church services.

Between retiring in Port Arthur after a 36-year career as a machinist at Standard Alloy and coming back to the Golden Triangle to be closer to family and doctors, Stanley and his bride spent 32 years living in Colmesneil.

Stanley built furniture and they both worked as Eucharistic ministers for their church. They accumulated three boats, one of which seats 15.

And they spent plenty of time on the water of Lake Tejas – when they were home.

The couple that three quarters of a century ago went all the way to Houston for their honeymoon, has sojourned on 13 sea cruises, with their favorite being Alaska. They traveled to Washington D.C. and saw the World War II monument.

“He broke down and cried,” Gladys said.

Back home, Gladys says she wouldn’t change a thing.

“He was a wonderful husband and provider,” she says of the man at the stop sign in front of her porch swing. “I just fell in love with him.”

They have had the greatest love of all, Stanley Simon says.

“Nobody never passed what we did,” he said. “I’ll guarantee you.”