OF Co-workers push McAlpin for supe

Photo: Melanie Charleston of the law firm Walsh Gallegos tells members of the Orangefield school board, including Brad Frye, right, how her company also offers a superintendent search service during Monday night’s meeting in the high school library.

“As you begin the task of seeking a new superintendent, we wish to relay our unequivocal support for Shaun McAlpin as that replacement,” began a letter delivered to the school board and read by Marla Blanke, the district’s finance coordinator.

It was written “From: Administration Office Staff” and signed by nine district employees including Dayna Smith, director of special programs; Kimberly Smalley, director of curriculum; and Marla DuBose, superintendent’s secretary.

Additionally, several parents of Orangefield students attended to offer support for McAlpin, who has been assistant superintendent for eight years.

Orangefield ISD is in the market for its next “permanent” superintendent because of the unexplained resignation of Stephen Patterson earlier this month.

Patterson had been Orangefield superintendent since 2012.

McAlpin was named Acting Superintendent when the board unanimously accepted Patterson’s resignation after a two-hour closed meeting Monday, Nov. 4.

The board held another special meeting Tuesday, Nov. 19, to interview three candidates to serve as Interim Superintendent.

According to McAlpin and Board President Ron Risingear late Tuesday, the board unanimously voted its preference but was withholding the name of the pick pending the completion of a signed contract.

Orangefield could name a permanent replacement for Patterson as soon as Feb. 10 if it chooses to hire the Austin-based law firm it already has on retainer to also be its headhunter, the board members were told Monday.

“With Walsh Gallegos, we can do a regular search in six months, or we can do a speed search,” said Ann Dixon, an educational search consultant who often serves as interim superintendent while leading the hiring process for a more permanent replacement.

Dixon was introduced to the board Monday night by Melanie Charleston, an attorney from the Austin-based law firm of Walsh, Gallegos, Trevino, Russo and Kyle, P.C. which has served as Orangefield’s legal counsel for several years.

Charleston noted that the law firm represents 500 school districts in Texas and New Mexico and has conducted about 30 superintendent searches.

On a significantly related note, she failed to shed any light on the reason for Patterson’s departure.

She did, however, say there was no severance agreement between the district and Patterson.

The seven-sentence news release issued by the Board of Trustees Nov. 5 said, “the Board will not be communicating on this personnel matter.” It did allow “we do believe Dr. Patterson’s resignation was in the best interest of the District.”

Responding Monday via email to a Texas Public Information Act request from The Record Newspapers for the Orangefield ISD to share copies of “complaints” against the superintendent, Charleston wrote, “The District believes this information is excepted from public disclosure and will therefore request a ruling from the Attorney General regarding that information.”

While public agencies have 10 working days to respond to a PIA request by either furnishing the requested information or requesting an AG opinion, the state’s top lawyer and his minions have 45 working days to render a decision.

If that ruling is that the information sought, is indeed, public record material, the agency then has 30 more working to either provide the info or file an appeal to the ruling in a court of law.

According to the timely published agenda, the seven members of the Orangefield school board met in a special session at the administration building Monday, Nov. 4 to “consider and discuss complaints against Superintendent” in a closed session and to “consider possible action regarding complaints.”

Records sought by The Record Newspapers showed that only nine people – neither Patterson nor board secretary Marla DuBose – attended the meeting.

The public forum announced on the agenda was canceled because there no members in attendance.

McAlpin did not participate in the closed meeting.

A 1996 graduate of Orangefield High School, the 41-year-old McAlpin has worked for the district since 2001. He was high school principal before taking on the role of assistant superintendent. “Mr. McAlpin has worked hard, and essentially handled the day to day responsibilities of this district for the last few years,” the letter presented by district administration office workers said.

“He knows employees by name. The students know him by name because he shows interest in each one … We each feel respected and valued by Mr. McAlpin, and feel the same toward him.”

Patterson was an All-District football player for West Orange-Stark. After graduating there in the spring of 1990, he went to Arkansas State on a sports scholarship.

After completing his teaching certification at Lamar University in 1995, he taught algebra, and geometry at WO-Cove and Beaumont ISDs, before moving to Orangefield as assistant high school principal in 2002. He was high school principal from 2005-2007, when he was promoted to director of curriculum and instruction. 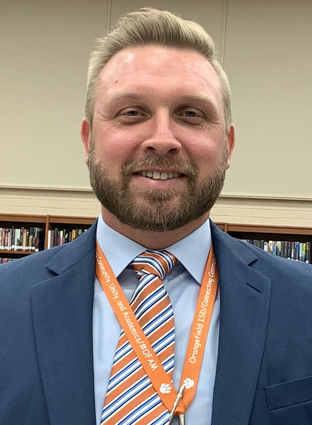