Photo: Mustang Andre Thomas caught the only pass of the night from quarterback Jayson Zeigler, but also caught one from Huntington's Devin Luker, that he returned for a 34 yard touchdown.

In spite of having just one senior among its ranks, the Community Christian School Lions broke into the postseason before finishing its season with an 82-35 loss to Faustina Academy from Irving on Friday, November 15.

The Falcons jumped out quickly but the Lions stayed close. Faustina scored 16 straight to start the game before CCS managed to put points on the board. Levi Rogers hauled in a 6-yard pass from James Menard for six points. A missed two-point conversion left the score at 16-6.

Faustina went back on the attack, scoring twice more before the Lions could put more points on the board. Menard completed a 20-yard pass to Isaac Rizzato with Menard kicking the extra point to close the game to 30-14.

That’s when the Falcons went on the march, scoring 24 more points for a 54-14 lead at the halftime break.

The Lions drew first blood in the second half, scoring on an 18-yard pass from Menard to Rogers. The two-point conversion pass between Menard and Rogers made the score 54-23.

The Lions scored twice more when the Menard-Rizzato combination worked again for five yards and another score, while Menard finished his tremendous performance with a 12-yard TD pass to Bryer Grey.

The last time Little Cypress-Mauriceville won a playoff game in football, the Hale-Bopp Comet was discovered, the Mars Pathfinder landed on Mars, and “Married With Children” was cancelled (that’s a TV show for you kids out there).

Now the wait is over after LC-M topped Stafford 48-21 at Channelview High School this past Friday night.

It was 1997 that the Battlin’ Bears reached the Class 4A quarterfinals after beating Cleveland, Whitehouse and Sweeny before falling to La Marque.

The next step now in the Class 4A, Division I postseason run for the Bears is an area-round game against Crandall, which defeated Kilgore in the bidistrict round 14-0. The area-round game will take place this Friday at 7 p.m. at Nacogdoches High School. Tickets at the gate will be $8.

The Bears, now 6-4 for the season, opened up the scoring in their bidistrict matchup with Stafford with the offense marching 67 yards for the score after the opening kickoff. Senior quarterback Ethan McCollum pushed the ball in from the four yard line and LC-M was up 7-0.

After a Stafford fumble on its first offensive possession, the Bears were able to capitalize with McCollum finding the end zone again on a 19-yard run, putting LC-M up 14-0.

The Bears put together an impressive 76-yard second-quarter drive that would put them up 20-0 going into the halftime break. McCollum claimed his third touchdown of the night

Carson Peet snagged an interception at the start of the second half, giving the Bears yet another opportunity to score. With McCollum taking off for 50 yards on the first play from scrimmage after the turnover, Andy McDow would cap the drive with a 13-yard run for another LC-M score and a 27-0 lead.

McCollum found the end zone again late in the third quarter, going in from the 11-yard line for a 34-0 LC-M lead heading into the fourth quarter.

The Spartans were finally able to score, but that was answered by the Bears who scored another TD to go up 41-7 when McDow crossed the goal line from the five.

In a bit of back-and-forth, Stafford scored again to cut the LC-M lead to 41-14 only to have Da’Marion Morris spring 48 yards for a TD and a 48-14 advantage.

What happens when a state-ranked team with one loss faces another team with just one win on the season? A 56-7 West Orange-Stark drubbing of the Huntington Red Devils is exactly what happens.

In the Class 4A, Division II bidistrict round playoff game between the two teams, the Mustangs jumped out quick and never let up as they took a 42-0 halftime lead before both teams agreed to allow the clock to run throughout the rest of the game.

The Mustangs now face area-round opponent LaGrange, a 12-7 bidistrict winner over La Marque this past Thursday. The WO-S/LaGrange game will take place this Friday at 7:30 p.m. at Moorhead Stadium in Conroe.

Jayson Zeigler Jr. came out as quarterback for the Mustangs, allowing starter Jerren Terrell the protection of a night off. Elijah Gales, the pre-eminent running back in Southeast Texas, scored three touchdowns and had 109 yards rushing on just five carries in the game. Gales’ touchdown runs were for four yards, 42 yards and 51 yards.

Dontrey McClain added a Mustangs touchdown on defense when he stepped in front of a Huntington pass and took off for 90 yards and the score late in the first quarter.

Turnovers spelled disaster for Bridge City as Navasota rolled past the Cardinals 41-12 in the Class 4A, Division I bidistrict round, played at Huffman Stadium this past Friday night.

The Cardinals suffered five turnovers against the Rattlers with world-class running back Darius Randle taking full advantage as he rolled up 177 yards with four touchdowns on just 15 carries for Navasota.

The Cardinals were trailing 35-0 when they finally got on the scoreboard thanks to a 54-yard catch and run by receiver Jackson Tims on a pass from Colby Collins. Bridge City finished its season in spectacular form, driving 69 yards in 12 plays with a touchdown pass play from Collins to Andy Lara with just two seconds left on the clock.

The Cardinals finished their season 3-7.

The Orangefield Bobcats came into the 2019 football season ready to play and ready to win. They did both exceedingly well, finishing the regular-season campaign 9-1. It was not in the cards, though, for the Bobcats to get past the Franklin Lions as Orangefield fell 23-14 in the Class 3A, Division I bidistrict round this past Thursday night at Woodforest Bank Stadium. 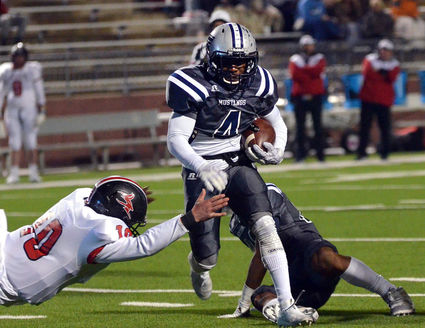 The Lions got on the scoreboard first, taking a 6-0 lead with less than a minute gone off the game clock. It wouldn’t take long before Orangefield answered. Chase Broussard grabbed a Lions fumble, taking it down to the Franklin 5 before he was stopped. Heston Puckett took it in from the 4-yard line and the game was tied at 6-6.

Another Franklin score put the Lions up 13-7 with a little over six minutes left in the first half. It took until the fourth quarter before more points hit the scoreboard when Franklin pushed it to 20-6 with another TD. A late field goal made it 23-6 with five minutes remaining in the game.

The Bobcats went to the air successfully in the comeback attempt, leading to a 3-yard touchdown run by Broussard. Quarterback Gunner Jones took the two-point conversion in but that was as close as the Bobcats would get.