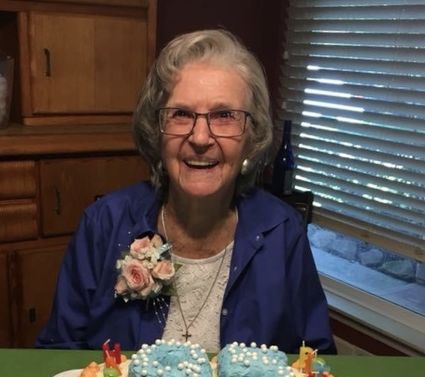 Funeral services will be held at 2:30 p.m., Saturday, November 23, 2019, at Claybar Funeral Home in Orange. Officiating will be Pastor Paul Zoch, of Good Shepherd Lutheran Church in Bridge City. Burial will follow at Hillcrest Memorial Gardens in Orange.

Visitation will be prior to the service beginning at 1:30 p.m.

Born in Vinton, Louisiana, on June 21, 1923, she was the daughter of John Erkel Mobley and Rose Elizabeth (Sweeney) Mobley.

Mildred was a devoted and longtime member of Trinity Lutheran Church in Orange.

She graduated from Vinton High School and went on to attend Port Arthur Business College as well as Lamar University.

Mildred worked as a secretary for Consolidated Steel Corp. and spent many years working as a Teacher’s Aid for West Orange-Cove CISD. She was very involved in her community as a volunteer in the HOST Program, a Bluebird and Camp Fire Leader, and was a lifetime member of the Texas P.T. A. She adored her family and was always so proud of each and every one of them.

The American Legion award was the highest honor you could receive at Vinton High School.

The recipient was chosen by the school faculty and was kept a secret until graduation night.

Mildred and her friend Mary Lou were friendly rivals all 11 years of school and were even Co Valedictorians.

One of Mildred’s mother’s favorite stories to recall was the moment Mildred’s name was announced as the winner of the American Legion award.

She was very proud of herself to know that the faculty had chosen her and held her in such high regards.

Mildred was a very loving daughter, wife, mother, grandmother, great-grandmother “Granny”, and friend to many.

Her memory will be held dear by all who knew and loved her.

She was preceded in death by her loving husband, Raymond H. Pfluger; and her daughter, Rose Ann Denson.