Lamar State College Orange’s president, Dr. Thomas Johnson, was back in the city of his youth last Saturday.

He was in downtown Port Arthur for an afternoon that was split between friendship and nostalgia.

That’s how it’s often been during his first 15 months at the helm of Orange’s downtown two-year college -- full of new friends, old friends and plenty of nostalgia as Johnson’s career has brought him from Port Arthur, through The Big Thicket, Houston, Tyler and back to Southeast Texas.

“We’ve had a magnificent year here at Lamar State College Orange,” Johnson said. “I’m very thankful and looking forward to 2020 and the start of our 51st year.”

Thankful doesn’t begin to say enough about how Johnson feels this Thanksgiving weekend as he and wife, Karen visit with their two children.

“I’ve been blessed beyond reason,” Johnson says. “Everything I’ve done in my life has led me to where I am now. An I’m so grateful for it.”

Johnson went to Port Arthur to visit some old friends from Tyler Junior College, who were down for a basketball game against Lamar State Port Arthur. He watched the game with Dr. Betty Reynard, LSCPA president.

“She has really helped me learn my way around,” Johnson said.

But mostly Saturday, Johnson turned on the memory machine.

“I lived in Port Arthur all the way through first grade,” he said. “My parents had been living there since 1945, when my dad got out of World War II and they got married.

“My older brothers and sisters all graduated from Thomas Jefferson.”

It was home of the old downtown Post Office and is currently being remodeled to house the offices of the nearby Motiva refinery.

“I spent a tremendous amount of time in downtown Port Arthur,” Johnson said. “My grandparents and a lot of my aunts and uncles lived around, in Port Neches and Bridge City.”

Johnson said his mother, Margie, was a welder in the Texaco refinery during the war and his dad worked at Texaco a while before settling in at the Federal Building.

When Johnson was 7, the family moved near Livingston and his father lives there today. The LSCO prez says he drove up there Saturday to visit his dad before his trip to Port Arthur.

“My mother and father were married almost 72 years when she died,” Johnson said.

He was the youngest of five children.

Pictures of he and Wilson are prominent on his office mantle, but they are tiny next to a wall-size plaque from his 20 years in law enforcement.

Before he was an educator, Johnson won a degree in criminal justice from Sam Houston, and worked for the Houston Police Department.

Midway in, he was assigned to the security detail for then Vice President George H.W. and future First Lady Barbara Bush during their frequent visits to their adopted hometown.

“They were two of the nicest people I’ve ever met,” Johnson said.

He was working in Community Services for the PD when the DARE program began there. He got a master’s in management and went into training administration at the Houston Police Academy.

“We had 5,500 police officers and 2,000 civilians that had to keep up their educational requirements and then, of course, you’re training the cadets.” Johnson picked up his doctorate in higher education and headed up the HPD’s Strategic Planning division until he retired.

“I was very fortunate that I worked in many aspects of a police department that prepared me,” he said.

Johnson returned to his alma mater and worked with Sam Houston State’s Border Security Program. He taught classes there and for Houston Community College.

“I was very, very happy when I got the call that allowed me to come here,” Johnson said. “I love Orange. I love the community. We’re just a few shy of 2,400 students, a six-year high for enrollment.

The state reduced tuition by 25 percent at LSCO this fall and the school is putting together its first 10-year master plan.

“We’re very excited about the growth of the footprint of the college,” Johnson said. “We’re looking at adding more programs, particularly in the area of workforce or vocational trades.

“What I’ve seen in Port Arthur, what we have is growing and the potential for growth is wonderful. If we’re able to land Chevron Phillips [an $8 billion chemical plant], I believe we’re on the verge of revitalizing the entire Golden Triangle, which is incredible.” 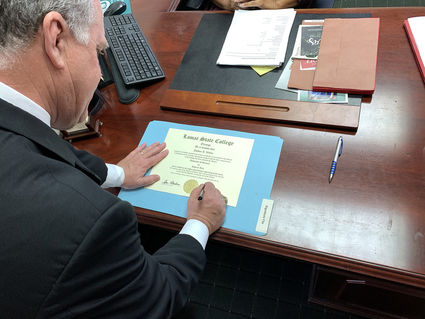 Johnson says he and his brothers and sisters were the first in their family to finish high school.

“Education is a great equalizer in our country,” he said. “I’m proof of that.

“I would like to spend the rest of my life – however long it is – educating young people and people who need second chances. I have no intention of retiring. I feel like I’m right where I need to be.”

Before going into education, Lamar State College Orange President Dr. Thomas Johnson had a 20-year career with the Houston Police Department and has the badges, pins and plaques to prove it.