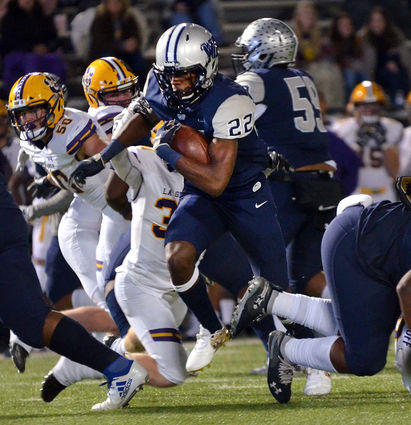 Photo: WOS freshman Jamaal Shaw bursts through the Leopard defense on his way to the end zone. Shaw had 43 yards on 5 carries and scored from 18 yards out. Record Photo Meri Elen Jacobs

A stable of ‘Stangs led West Orange-Stark to a definitive 42-14 victory over the Lagrange Leopards this past Friday at Conroe’s Buddy Moorhead Stadium. The Mustangs will face the Bellville Brahmas this coming Friday at 6:30 pm at Randall Reed Stadium (formerly Texan Drive Stadium) in New Caney.

The Leopards had barely caught their breath before the Mustangs had 14 points on the board. It took Terrell and Company four plays to march down the field and score. A Terrell to Gales 24-yard pass put six on the board and kicker Angel Ibarra’s PAT was good.

Their next possession, “40” was the lucky number. After two holding calls on junior Jalen Thompson, who wears jersey number 40, Terrell threw a 24-yard pass to Thompson who took it right in for the score.

Thompson scored again on a 56-yard Terrell pass late in the second quarter and Ibarra’s PATs made it 21-0 to end the half. The second half begin with another Gales touchdown, this one on a 43-yard run after five plays.

Lagrange got on the board in the third quarter with a long pass from Cadon Cooper to Bravion Rogers that took them down the field. Another short Cooper to Rogers pass for three yards put six on the board for the Leopards.

Toward the end of the third quarter, freshman Jamaal Shaw checked into the game and did not disappoint. After just four plays, Shaw broke loose on an 18-yard scamper to add six more to the board. Ibarra’s PAT was again good.

Mustang Terry Harris scored the last touchdown on a 4-yard run after WO-S and LaGrange traded fumbles. The Leopards scored again, late in the game with the big play being a 49-yard pass from Dayton Jarvis to Cooper. The touchdown came on a one-yard run by Mitchel Schultze.

The Bellville Brahmas are no stranger to the Mustangs. Although most thought that WO-S would meet up with the Jasper Bulldogs in round three, the Brahmas beat the ‘Dogs 54-35 to advance to the semi-final round of the Region III Division II game. Bellville faced WO-S in the same round in 2015 and 2016 and lost both games, 42-3 and 49-7.

The Brahmas check in with a 9-3 record, losing one of the three games to Giddings in district play, 30-16. They beat LaGrange 52-27. Bellville likes to keep the ball on the ground and has a great sophomore running back themselves, Richard Reece, who has rushed for 1846 yards. Bellville’s quarterback, who is also a sophomore, likes to hand the ball to Reece or sophomore Robert Briggs.

The Brahma defense has allowed opponents to score 226 points. Senior Grayson Mays has the experience on the defense as a four-year starter. Other defensive players to watch are Zach Hood, Dalton Bills and Quarvante’ Butler.

Tickets will have to be purchased at the gate the night of the game. Prices are $10 for both adults and students. The address is as follows:

Directions to the stadium are:

From the North – Take I69/Hwy 59 S towards New Caney and exit SH 99 The Grand Parkway. Continue on the service road of I69/Hwy 59 S for approximately 1 ¼ mile. Turn right onto Valley Ranch Parkway to enter the stadium.

(Note: This address may not appear correctly on GPS. Please use the address for Porter Glass & Mirror. We are located directly behind them)