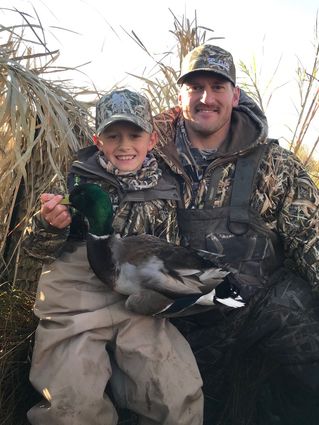 The first half of duck season for local Texas waterfowl hunters closes this weekend and for some it’s a merciful break. Reports from all along the coast were almost mirror images of one another, the combination of few birds, high bluebird skies, and little wind was the kiss of death for most

hunters. The lack of any “hunter friendly” weather was easily the biggest problem most waterfowlers faced, the steady stream of cold fronts promised by the weather folks basically disappeared and so did many of the birds. The birds that still remained in the area got educated real fast and headed for areas with little or no hunting pressure. A few really dedicated souls who had both time and resources went mobile and found some out of the way spots that were holding ducks and got in on some nice hunts, many of these were actually on public land so contrary to popular belief it can be done.

Well now that we won’t be able to shoot ducks until the split reopens many hunters will either try to fish or go chase deer for a few days.

The rest of the waterfowl world will set their sights on geese and they should be able to find some as daily it seems more birds come into the area.

The numbers of geese already in our part of the state are really up from last year at this time, the coastal prairie is prime right now and it looks like it may only get better.

A little boost from the weatherman is all you need to help get these wary birds down from ultra high altitudes and closer to decoying in your spread.

There are some really big concentrations of geese starting to build up locally, as well as farther south down the coast.

Hunters wanting to take advantage of the numbers of birds around those areas really need to scout and find the flyway these birds are using, you just can’t pick a spot and hope to decoy these birds into range because that just isn’t going to happen.

Contrary to popular belief geese are really smart; you need to do your homework to have any chance at all.

Big goose spreads with some sort of motion like flags or kites will help with getting wary birds into range.

Full camo or white suits while laying in a spread is a must, just like gloves, facial camo or a mask should be.

If the birds are coming to your decoys don’t call too much and let them work their way in, if they try to leave give them a call and many times they may circle back and try again.

The use of a flag is really helpful especially on young geese or Ross geese; they seem to really

like the motion and sometimes will just dive into a spread.

If you have never hunted geese before don’t get discouraged if your results aren’t what you think they should be, geese are tough to say the least.

One day they will have you pulling your hair out wondering why you did all this work only to be frustrated as wave after wave just flies too high over your spread or just simply refuses to decoy.

But on those days when it all works right it can be the best feeling in the world seeing those big birds come in with their feet down and wings cupped ready to light.

One word of advice for those folks hunting around big concentrations of geese and other hunters, do yourself a favor and hold the “skybusting” to a minimum.

Snow geese are already tough enough to hunt without educating them even more with “mile high” shots that make even the youngest and dumbest geese seem like old veterans.

Work a little harder on the decoy placement, scouting, and calling if you want to up your odds of success.

Pay close attention to the weather and remember that fog, low skies, and wind are the goose hunters best friend.

Good luck and enjoy your time in the field.