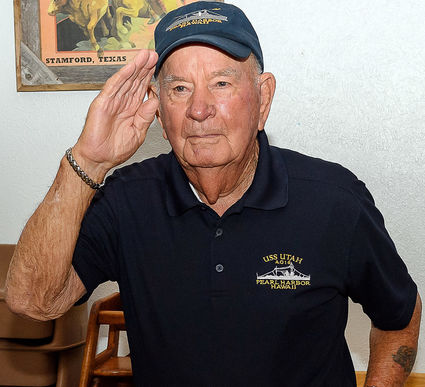 Santa Claus is riding in on a sea of red, white and blue this year as Orange County communities kick off the Christmas year-end holidays with parades.

The Kiwanis Club of Orange is hosting the 71st Annual Orange Christmas Parade Friday, Dec. 6, beginning at 6 p.m., and the Christmas in Orangefield parade is at 10:30 a.m. Saturday, Dec. 14.

But in between, the Bridge City Chamber of Commerce has combined its 6 p.m. Saturday, Dec. 7 parade with a remembrance of Pearl Harbor Day.

“What’s special this year is that it is on Pearl Harbor Day, so this year, our theme is “Red-White-and-Blue Christmas,” said Barbara Jane “B.J.” Hanneman, administrator for the Bridge City Chamber.

Cedric Stout, one of only a handful of living survivors of the Dec. 7, 1941 Japanese attack on the Pearl Harbor, Hawaii, Naval Base, will be the parade marshal.

The 98-year-old Bridge City resident is a rare find these days, a man who survived the hail of explosive ordinance from the sky and the hellfire that was flaming oil floating atop the harbor’s waters and is still walking among us on the 78th anniversary of what’s become known as Pearl Harbor Day.

He was eating breakfast aboard the battleship USS Utah when two torpedoes sent the ship to the bottom of the harbor.

Initially, the newly minted sailor thought it was a drill.

“I saw all the commotion going on and thought, somebody’s having some fun,” he said as part of an oral history prepared for the Pearl Harbors Survivors Association. “But then a bullet went ‘phew’ right over the top of my head and I knew it wasn’t no fun.”

A World War I battleship that had once carried president Herbert Hoover on a diplomatic mission to South America, the USS Utah was being used for target practice by the Navy in 1941.

At Pearl, it was berthed on the opposite side of Ford Island from Battleship Row, where most of the attack’s damage was inflicted.

Within minutes of the first shots being fired that morning, torpedoes fired by dive-bombing Japanese planes slammed into the Utah’s hull and the ship began to list. Just 10 minutes later, the ship snapped its mooring lines, rolled over and capsized.

In those 10 minutes, Stout said he received an order to abandon ship and complied -- eventually.

At first, he said, machine gun fire from the attacking warplanes kept him from running across the deck.

“When it became apparent that the Utah was going to roll over,” Stout said, “we decided our chances were better dodging bullets than staying aboard to drown.”

Just in time, Stout and other sailors made it to the lines, slid down to the dock and found cover ashore.

For the rest of that long day, Stout helped the rescue effort, then he spent three days in the hospital.

More than 2,000 U.S. servicemen and civilians died at Pearl Harbor. Sixty-four of those were aboard the USS Utah.

“A Disney Christmas” is the theme for Friday’s Kiwanis Parade in downtown Orange.

Booths will be open at the Orangefield football field at 11:30 a.m. with a holiday market for food and crafts.

Bridge City is expecting more than 60 floats and group entries for its Annual Christmas Light Parade.

The best-themed entry will receive the Mayor’s Trophy and a $200 prize from Mayor David Rutledge. First, second and third place trophies will also be awarded in categories for Float, Ambulatory, Dance and Vehicle.

The parade route will again be along W. Roundbunch Road, from First Baptist Church to Bridge City Intermediate School.

Hanneman said parade entries are still being taken at the Chamber Office at 150 W. Roundbunch Road or online at www.bridgecitychamber.com .

Entry fee is a donated toy from each participant. The toys go to the Bridge City/Orangefield Ministerial Alliance for its Christmas assistance program.

“The whole purpose of the parade is to collect toys for the Ministerial Alliance,” Hanneman said.

“We should have good weather Saturday, so I expect a good turnout.”

Pinehurst also has big weekend plans, with its “Pinehurst Family Christmas” from 5:30 p.m. to 8:30 p.m., Saturday, Dec. 7 at West Park, down the street from Robert’s Meat Market.

Kingdom Zoo will be there with small animals, Santa and Mrs. Claus and free photos with Santa.