From Orange to Broadway and back again

Photo: Sophie Broad is excited to return to the Lutcher Theater Saturday, where she theatrically debuted in her first recital at the age of 3. Courtesy photo.

Sophie Broad got the entertaining bug with her first recital.

“My mom actually put me in Lorne Badon School of Fine Arts at the age of 2½,” said Broad. “My first recital was at the Lutcher Theater at 3 years old and that’s the same theater I’m coming to…I’m so excited, It’s finally here!”

“I really didn’t get into musical theater until college at a performance university,” she said.

She selected Oklahoma City University to continue her education. “It’s a huge performing arts school. The number one rated in dance,” said Broad. “We finally got it over Julliard, which is really, really cool.”

“The dance program is the first dance program that caters to musical theater as opposed to ballet and like modern. I was fortunate enough to take ballet, tap and jazz there. It was very well rounded. I was able to take acting and a lot of voice lessons which was very new to me, because we just don’t have anything like that, back in Orange,” said Broad. “We definitely have all the dance training. Orange equipped me with everything I needed to take the next step.”

“Once I took voice and acting, it was summer of my sophomore year in college, I was hired by the Theater of Oklahoma to do ‘West Side Story’.” That was her first professional gig.

“It was so cool, because one of the guys in the production came through Orange a few years back in “A Chorus Line” and I saw him perform it when I was in high school.”

The next summer she did “Hello Dolly” and “Momma Mia” while studying for her Bachelor of Performing Arts in dance performance.

Broad graduated last year in December, moved to New York City and started hustling. “You have to hustle in this business.” In April she landed Jimmy Buffet’s “Escape to Margaritaville.”

“It’s been crazy since graduation, but it’s been a dream,” she said.

This is the initial run of the National Tour. Rehearsals started for the show in August and the first performance was in Providence, Rhode Island on Sept. 29.

She has actually met Buffett. “He has been so amazing. He’s popped in every now and then. It’s been cool to meet him and sing on stage with him. If you had told my 12-year-old self this, I never would have believed it.”

The show has a storyline derived from a compilation of classic Jimmy Buffet songs, plus a few new ones. A Caribbean Island bartender/musician falls in love with a tourist in this high energy show. Broad said it’s amazing how intense the dance numbers are. She is a member of the ensemble and has a small role as Mrs. Hasty.

“It’s a high energy ball of fun to Jimmy Buffett’s music,” she said.

One thing different about this show is the audience. They are filled with “Parrot Heads,” the nickname of Buffett’s loyal fans.

“I didn’t really know about the ‘Parrot Head’ community. They come to our performances in these cheeseburger costumes and blow up shark costumes, it’s a blast. It’s really; really cool…they are passionate. It’s so cool to see, so much fun.

“They sing all the songs along with you,” said Broad.

Broad is contracted with the show through next July. That contract could be extended or she might go on to her next venture.

Broad said the best thing about touring is, “the opportunity to travel and the opportunity to perform in front of these audiences that are so passionate about Buffett’s music. It’s an all time high.” The audience sings along with the show.

What’s the worst thing about touring? “It’s hard to complain. We have it so good. I am sitting here at the pool in Fort Lauderdale…I would say, not having home cooked meals. In the grand scheme of things that is really a small part, but we make it work.” Making it work includes creating an Instagram channel where they explore food on the road. “It’s really a joke, but it’s creative ways to cook in a hotel room,” she laughed.

She can’t wait to visit. “My hometown is absolutely everything to me. I was born and raised there. I come back all the time to choreograph at my hometown studio. It truly molded and shaped me into the person I am today. They taught me how to go for it…I would not be here without the people from home. It’s been my dream to come back and perform on the stage I had my very first recital on.” 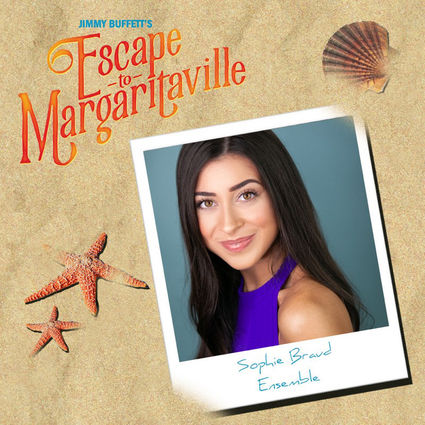