The Bellville Brahmas got more than they bargained for when they showed up at Randy Reed Stadium in New Caney Friday night. The Mustangs (10-1) beat the Brahmas, 24-14 and will move on to face a familiar foe in the Silsbee Tigers (8-4) Friday night at Beaumont ISD Memorial Stadium at 7:30.

The Mustang offense has performed well under the leadership of junior quarterback Jerren Terrell. Terrell has passed for 1287 yards, completing 96 of 163 attempts. Twelve players have contributed to 2434 yards rushing, with sophomore Elijah Gales at the top with 1232 yards on 147 carries. The top two receivers of sixteen possible are Jayson Zeigler, Jr. with 21 catches for 137 yards and Jalen Thompson with 13 catches for 256 yards.

Silsbee relies heavily on the run with a three-headed monster in Dralyn Taylor, Christopher Martin and Antonius Arline. Taylor was the hero last week against Giddings where he scored three touchdowns and capitalized on two interceptions.

Down at the half, the Tigers scored 28 unanswered points in the second half to win the game. 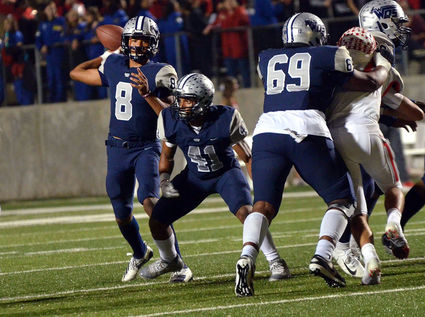 The Mustangs beat Bellville, who was the second place team out of their district with both the pass and the run game. While WO-S racked up 230 yards on the ground, the first touchdown was a Terrell to Jerold Brown pass from 19 yards out. Gales, who rushed for 156 yards scored the other two touchdowns while kicker Angel Ibarra hit a 43 yard field goal before the half. All three of Ibarras PAT’s were good. WO-S finished with 344 yards of total offense.

The Brahmas sophomore running back, Richard Reese, was held to less than 100 yards until late in the game. He finished with 27 carries for 151 yards, but his touchdown came on a 43 yard screen pass in the second quarter.

Tickets to the show down between the Mustangs and Tigers will only be sold at the gate the night of the game and are $10.