Chris Kovatch has been the volunteer’s volunteer around town and Monday night he was honored for it, as 2019 Citizen of the Year.

The award was announced and presented at the Annual Banquet of the Greater Orange Area Chamber of Commerce held at the Shahan Center on the downtown campus of Lamar State College Orange.

“He’s a hard-working individual with a heart of gold,” presenter Gisela Houseman said of Kovatch, who works for Bridge City Bank in Orange when he’s not volunteering.

Earlier in Monday’s program, he and Orange city councilman Brad Childs were presented Chairperson of the Year Award for their work on the Orange Grove project.

The project to promote pride and beautification in Orange County sells and delivers concrete orange sculptures to display outside businesses and homes.

Kovatch is a member of the Orange Lions Club, actively involved with its annual carnival, works with Habitat for Humanity, is vice president of the Orangefield Music Boosters, dedicated to his church, Shangri-La, United Way of Orange County and Orange County Disaster Rebuild.

“The organizations I work with and everybody that’s a part of them, that’s what I love so much about Orange. It is the people,” Kovatch said.

“Everybody’s so focused on making Orange great. It is already great. I’m so honored to receive this. Thanks for letting me do a little small part.”

The company was cited by incoming Chamber Board President Maureen McAllister as an example of the Chamber’s 2020 theme: Stronger Together.

McAllister cited Monday’s Feed The Funnel activity put on by DOW with the help of West Orange-Stark students and community volunteers. Together, employees, students and volunteers packaged 4,000 holiday meals in 2 ½ hours for students and the community.

“When I came here, the first thing my people told me was we want to serve our community,” said Jean Algate, the site manager, in receiving the award.

Back To School Orange County received the Non-Profit Community Service Award. The project began in 2013 at the Victory Life Church under Associate Pastor Steven Burks and has grown to deliver school supplies to more than 1,000 students a year

Kacey Burnitt was named Ambassador of the Year and Kristen Placette and Cindy Mims were named Lifetime Ambassadors.

In addition to regular awards, each winner received a Congressional Certificate from the office of U.S. Rep. Brian Babin.

Chamber President Ida Schossow passed the gavel and Chairman’s jacket to McAllister at the beginning of Monday’s program.

McAllister, a past chairman, explained that International Paper’s Ed Barr was set to be the 2020 chairman but he was transferred from Orange by his employer. 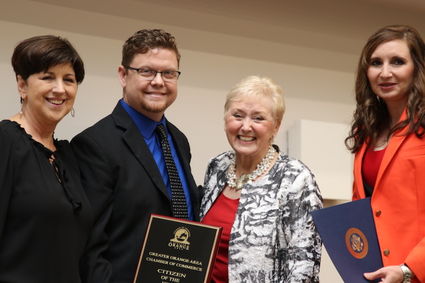