BC Chamber names Juneau BCHS December Student of the Month 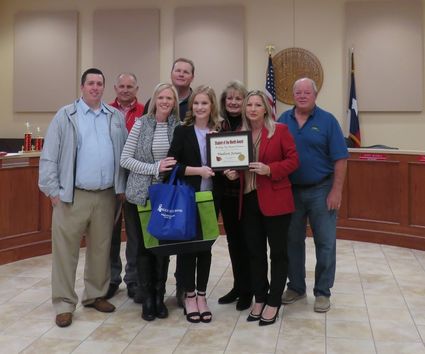 The Bridge City Chamber of Commerce is delighted to announce that the December Student of the Month for Bridge City High School is Madison Juneau. Madison was presented her certificate and gift bag by Ambassador, Candace Mulhollan, RE/MAX ONE Realtor, at the December Networking Coffee hosted by Bridge City ISD.

Madison is the daughter of Amber and Dathan Juneau.

Cathy Riley, English Department Chair and Director of Bridge City Strutters, said, “MADISON JUNEAU is absolutely one of my favorite students because she is genuinely kind and one of the most multi-talented young ladies that I have ever encountered.

She can be seen dancing on the gridiron or on the contest floor, singing for various functions as well as for contests, and acting in UIL plays.

Being 1st Lieutenant of the Bridge City Strutters, MADISON leads by example as well as empowers her team members.

She demonstrates a positive influence on others uncompromising her morals and integrity.

As a matter of fact, MADISON is well-grounded.

I have noticed how she exemplifies strong morals and rises above negative influences and pressures in everyday school situations.

MADISON is an outstanding role model for others to emulate.

When I think of MADISON JUNEAU, I think of an abundance of talent, a joyful disposition, and a love for life.

She is that rare find that all educators dream of having in class.

MADISON will always have my respect and my heart! I love you, MADISON!”

She is multi-talented and has achieved so much in her time as a music student at BCHS. Some of Madison’s accomplishments in music are as follows: Pre-Area in the TMEA competition for 3 years, the Outstanding Female Performer at All-State Solo and Ensemble her Sophomore year, and gold medals on her solos at the Regional and State levels each year.

She has been an officer in her Drill team for several years and a leader in the Drama department.

Outside of school, she has also distinguished herself.

She has composed music as well as created music videos of her music.

She has been in several local film endeavors.”

Stacy Webb, Theatre Teacher, said, “Madison has a flamboyant talent that permeates those around her. Her joy is infectious, evidenced in her kind heart. A triple threat (She can sing, dance and act!), she is a huge asset to the theatre department. It has been my great privilege to direct her the past four years, as I've watched her grow in confidence and leadership by leaps and bounds. I want her to know that I love her dearly, and to thank her precious family for sharing her with me. You did well, Mom and Dad!”

After graduation, Madison plans to attend college and major in vocal performance and music education and minor in theatre.