Monday, the Bridge City-Orangefield Ministerial Alliance received $484 in new undergarments and socks from the Bridge City Lions Club to be distributed to needy children in the Bridge City/Orangefield area. They will be dispensed Friday along with all the toys collected from area organizations and the community.

This year 430 children in 172 families will have a brighter Christmas due to the generosity of the community. “I think this year, we’ve had more donations than we’ve ever had in the past,” said Melissa Isaacs, director of the Ministerial Alliance. “As far as kids go, we are three less than last year.”

It gets a little crazy the week of distribution.

“When Monday morning hits, we get the trailer of toys from the parade Saturday night,” said Melissa Pitts, the chairman over the toy drive. “Then all the churches bring in their toys from the Christmas in July drive. It’s just a mass pile of Toys.”

Isaac said, “We filled up four vehicles just to get [the toys] over here from the chamber this morning.”

Pitts said, “Between the toy chairmen, their volunteers, Orangefield Uprising group, they come and help us sort everything by age group and mark the barcodes for us. They start pulling what they need from what the kids want. It goes from chaos to this (as she gestures to the toys) pretty quick.”

“We had quite a few bike donations and we just purchased some more,” said Isaac. “We have 19 more to purchase, because we try to make sure that every child that asks for a bike is going to get a bike.”

That’s usually the big ask for the kids.

“We also have some newborns that needed a car seat, a pack-n-play, one asked for a toddler bed,” she said. “We’ve been blessed to give them everything they need.”

They started registering children for gifts in October. Registration is closed for this year. “We ended it last Friday,” said Isaacs. Distribution for those registered is Friday from 9 a.m.-1 p.m. at Liberty Baptist Church.

“For the elderly that is on a fixed income in the Bridge City-Orangefield area, we gave $50 gift cards to Walmart,” said Isaac. “Thanksgiving, they got Thanksgiving baskets, boxes of food, but for Christmas they got gift cards.” Isaac said they could use it however they needed, not just for food. Some may need blankets or heaters instead.

She said so many organizations and individuals donated food for the Thanksgiving baskets that she only had to purchase an additional $40 in food to complete 40 baskets. “That’s how loving everybody is.”

“We feed all of Orange County, but for financial needs it is just Bridge City and Orangefield. We’ll help with rent, utilities. When school starts, we’ll help with school supplies,” said Isaacs. “Every month in the summer, we try to do something different.” 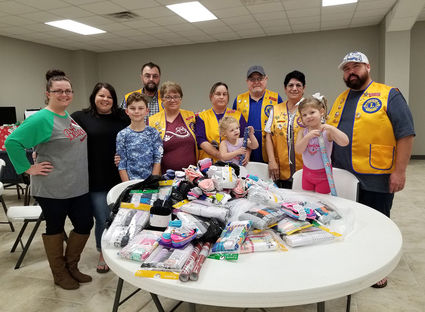 In June they kicked off with pizza kits, lemonade and watermelons. Everybody that came in July got a fan. In August, they gave out school supplies.

They follow the USDA income chart for qualification of services. If someone hits a crisis that normally doesn’t qualify, such as a house fire or death in the family, they qualify for six months, regardless of income.

They will start over on Jan. 6 for 2020 to continue supplying food and financial needs to the residents in Bridge City and Orangefield. They are open Monday and Wednesday, 9a.m.- noon. The phone number to the BC-OF Ministerial Alliance is (409) 735- 8296.