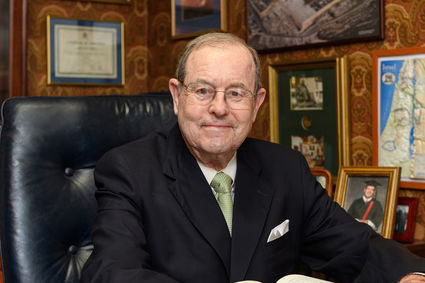 Photo: Jack Smith, local attorney, says he is running for County Democratic Party chairman because it’s time to step out and do something more than put a sign on your car.

As the only Orange County resident to sign up to run for public office as a Democrat next year, the next Orange County Democratic Party chairman-by-default isn’t too upset about not having any candidates for county office.

“I’ve long been of the belief that the people in local jobs – including judges – should not be connected to either party,” Jack Smith said.

The longtime local attorney was interviewed Tuesday, a day after the deadline for people to file for a place on 2020 county ballot, had passed.

The Orange County Republicans placed one – or two – individuals on the ballot for each of the county’s elected officials jobs, including GOP county chair David Covey, who is running for a second two-year term.

“I found out from a friend that nobody was going to run [for Dem county chair], so I said, ‘If nobody else will do it, I will,’” said Smith, who only signed up last weekend.

“I was so outraged at the conduct of [President] Trump and the far right wing of the Republican Party, it’s time to step out and do something more than put a sign on your car.

“I’m going to work to promote Democrat candidates in state and national elections.”

Louis Ackerman, the current county chairman for the Democrats, said increased work opportunities left him without, “the time to give the position the attention it deserves.

“We accomplished a lot of what we set out to do and it’s times to hand the reins over to someone else.”

Deborah Mitchell resigned as local Democratic chairwoman in 2017 and she and attorney Gail Barnett were the only two who ran as Democrats in the 2018 county election. A, with several long-time Democrat incumbents opting to run as Republicans not to be swept away by a Red tide.

Orange Countians have been voting 80-20 for Republicans in recent years. In 2018, about 67 percent of Orange County’s 26,400 voters marked the straight ticket, something that has been eliminated going forward.

While Smith will be the only local name on the Democratic Party ballot for the March 3 primary, 14 Republicans will be on the ballot for county-paid jobs and four more are running for district attorney and the two district judge benches, which are primarily paid for by the state.

While Precinct 4 Constable Lane Mooney was, as expected, a last-minute entrant into a race for Sheriff to replace the retiring Keith Merritt, the biggest news was the lack of a couple of announced candidates filing.

Ditto for Mike Marion, an assistant county attorney, who was planning a run against Troy Johnson, four-term sitting judge for County Court At-Law No. 2.

Marion said Tuesday he was recently reminded that several years ago he had pledged to never run against Johnson.

“I just felt that being true to my word was more important than anything else,” Marion said.

Gothia will have a primary opponent in Ernest Bayard of Vidor as he runs for a two-year term. Kirk Roccafforte, who replaced Gothia as Precinct 3 Commissioner in the summer, faces a challenge from retired plant worker Carl LeBlanc.

Three other GOP races will be contested in March.

Mooney will face off against current Sheriff Deputy Rob Strause; Sam Carpenter, Jr., will take on Brad Frye for the Precinct 3 Constable job; and Orange attorneys Rex Peveto and Michael Catt face off for the 163rd District Court Bench being vacated by retiring Judge Dennis Powell.

Smith said he previously had served on “the Little Cypress school board, way back. But I long ago determined being a professional politician was not my calling.

“My calling was to be a good lawyer,” he said.