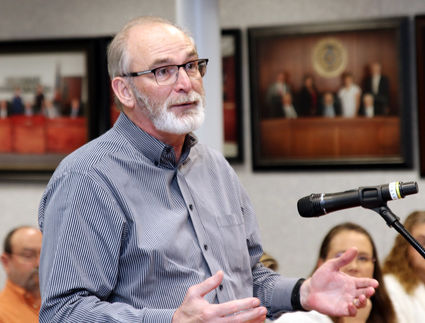 Orange County commissioners opted Tuesday to roll the dice on joining a multi-county agreement to defray the costs of paying public defenders for death-penalty cases.

If there is a death-penalty case.

District Attorney John Kimbrough told commissioners that it had been about 10 years since Orange County last tried a death-penalty case.

But he added that the county had “at least two capital murders pending. We don’t know yet if they’ll be death-penalty cases.”

The terms of the two-year interlocal agreement before commissioners was a cost to the county of $27,000 per year.

But Commissioner Kirk Roccaforte pointed out that not only was the county required to pay that fee even if it didn’t have such a case, but it could cost more.

That, like a group insurance policy, the county could be assessed even more money if the other members of the group have higher than expected expenses.

Death-penalty cases are expensive, Kimbrough pointed out, and if the defendants are found to be unable to pay for their defense, the county foots the bill for public defenders.

“If we have a death-penalty case, we’ve got trouble,” Kimbrough said. “You have to have two [defense] lawyers that are qualified for death-penalty cases. We have none in Orange County and there’s only one in Jefferson County.

“This agreement says they’ll provide us with two quality lawyers and an investigator. But the rest of the stuff is on the county’s expense. And if the defendants come in and say ‘We want all the DNA evidence re-tested,’ that could add up to $1 million.”

Kimbrough said this was at least the second time the county had been asked to participate in the program.

“They came here three or four years ago and the county decided not to do it.”

“If we have a big death-penalty case, it’s going to be a big problem, regardless,” Kimbrough said.

Commissioners okayed the payment of $473,000 in weekly bills including $118,000 to the county appraisal district.

Clark Slacum, county engineer, reported that East Roundbunch Road would remain closed until at least February as contractors have had to reorder parts for the swingbridge over Cow Bayou.

Joel Ardoin, emergency management coordinator, said the Small Business Administration would operate a Disaster Loan Outreach Center at the County Expo Center through Jan. 23, to assist people in closing on their loans to rebuild after Tropical Storm Imelda.