Shahan steps up for Pinehurst council 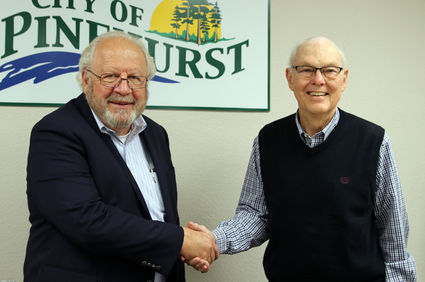 Photo: Dr. Michael Shahan, left, shakes hands with Mayor Dan Mohon after the City of Pinehurst city council appointed Shahan to serve as alderman until the May 2020 election. Shahan is replacing Mohon as alderman after Mohon recently replaced Pete Runnels as mayor.

An old hand around Orange is pumping some new blood into the Pinehurst City Council.

Tuesday night, the council appointed Dr. Michael Shahan, the retired Lamar State College Orange president, to serve the final four and a half months of an unexpired term as alderman.

“I’m more than happy to help out for a few months and learn a little more about how the city operates,” he said.

“I’ve lived here for 21 years but I never thought about serving in that kind of capacity.”

Shahan was president at Lamar State Orange for 24 years but has been a man of leisure since retiring in 2018.

“I’ve been entertaining myself, keeping busy with projects,” he said “We did a little traveling. Life’s good.s”

Shahan was accompanied by his wife, Bridget, to Tuesday night’s meeting.

The seat he’s filling until the May 2020 city elections used to belong to Dan Mohon, but Mohon moved to take over as Pinehurst’s mayor after the recent resignation of Pete Runnels because of health issues.

“I thought, well he’s retired and I knew he’d do a good job, and I called and asked him,” Mohon said when asked about finding his replacement.

“That’s kind of how I was appointed. I moved into Pinehurst in 2010 and Bob Williams asked me if I’d like to serve and they appointed me.

“He [Shahan] agreed to serve and I look forward to having him.”

Mohon was mayor pro tem and ran a number of council meetings in Runnels’ absence before his retirement.

Just prior to Shahan’s appointment and swearing in Tuesday, the council named T.W. Permenter as the new mayor pro tem.

At the close of business Tuesday, council approved a new contract for Robbie Hood, city administrator since mid-2016.