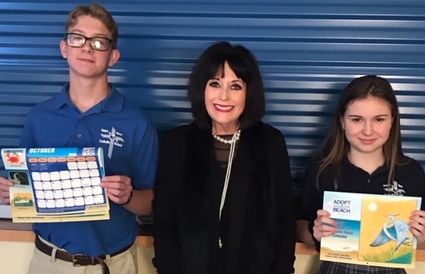 3,900 students across Texas entered the Treasures of the Texas Coast Children’s Art Contest, and both Miss Wimberley and Mr. Hogan’s artwork were among the top 40 chosen to appear in the calendar. These calendars will be distributed to schools throughout the state of Texas in January. Grace and Dalton’s compositions were also exhibited in the South Central Gallery at the state capital. They both received certificates of congratulations delivered to St. Mary School with the Texas State Seal from Senator Larry Taylor who sponsored the exhibit.

Grace and her art teacher, Cindy Claybar, each received a prestigious prize package that included two round trip coach tickets from United Airlines to any destination the 48 contiguous United States, Alaska, Canada, Mexico, and Central America, as well as a 7 night Caribbean cruise from Royal Caribbean. They also won a class part at Schlitterbahn Water Park in New Braunfels.

Dalton received a ticket to the USS Lexington in Corpus Christi, a ticket to the Texas State Aquarium, two tickets to the Houston Zoo, and two all day passes to Schlitterbahn Waterpark.

We are so proud of Grace, Dalton, and Mrs. Claybar!