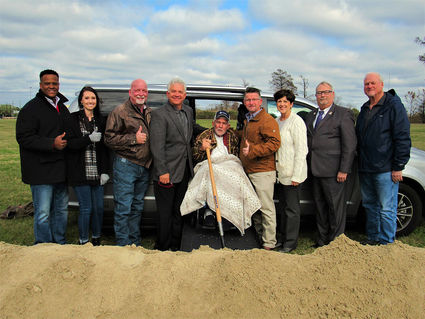 Photo: Bill Mello, former Orange city councilman, is surrounded by city leaders Tuesday as he grabs a shovel to celebrate the groundbreaking for the new Riverside Pavilion at the Orange Boat Ramp on the Sabine River.

Bill Mello was in a merry mood Tuesday. And he wasn’t alone.

About 30 of the city’s movers-and-shakers showed up eight days before Christmas for the groundbreaking of Orange’s Riverside Pavilion.

They were greeted by strong winds and bone-chilling temperatures.

There was a whole lot of moving-and-shaking going on.

“This is wonderful,” said Mello, the former city councilman who was one of the most influential in getting the project approved.

“I think it’s going to be such a plus for Orange.”

The dignitaries took turns shoveling sand back and forth as cameras clicked in front of them.

Located next door to the Orange Boat Ramp, the pavilion is expected to host not only fishing tournament weigh-ins but to be a concert venue and a host to city-wide and neighborhood events.

Mello couldn’t fit in the first salvo of photos.

Undergoing treatment for brain cancer, he is wheelchair-bound. His van was wheeled into place and several city council and Chamber of Commerce representatives joined him in commemorating the occasion.

“This is going to be a marvelous deal for our area,” he said when it was over. “It’ll be more of a boost for our area than anybody realizes.”

“This is a new beginning, a fresh start to this side of town,” he said.

“So now we have a reinvestment zone created for this area and then a new pavilion for families to enjoy.”

The project will allow a 100-percent city property tax abatement for up to two years of construction. After that, it drops to 90, 75, 60 and 20 percent per year.

“We’re just trying to build on what many have talked about for decades and that’s the river,” Spears said at the boat ramp.

“We want to bring people over here. We want to start having functions for families to come out and enjoy.

“And I think this is a great start today.”

John Gothia, Orange County Judge, along with Gopher Industrial’s David Jones, is credited with bringing the BASS event to Orange in 2013.

Bassmaster Elite has returned in 2015 and 2018, and Orange has responded with the biggest crowds in BASS history.

Mello figured the city spent close to $100,000 for temporary tents for those tournaments.

Said Gothia: “Doing the Chamber tournaments over the years proved the need [for a permanent pavilion], that we had an opportunity for something here.

“Finally, after several years of hard work and negotiations and getting everybody to buy on with it -- that it was needed -- we’re finally going to get this thing built.