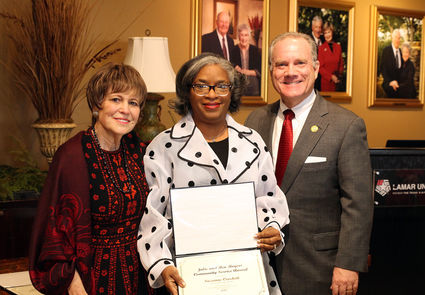 One of the biggest cheerleaders always on the scene for Lamar State College Orange is also one of its biggest success stories.

And the impact Dr. Suzonne Crockett has had on the college and the Orange community was saluted last Thursday, Dec. 12, when LSCO’s Associate Dean of Academic Studies accepted the Julie and Ben Rogers Community Service Award in a ceremony at Lamar University in Beaumont.

“Suzonne’s greatest contribution to our community is her belief in the potential for education to improve the lives of our citizens,” Dr. Michael Shahan, president emeritus of LSCO, wrote in a nomination letter for Crockett.

Dr. Thomas Johnson, LSCO’s current president, joined Regina Rogers, the daughter of the late Julie and Ben Rogers, to present the award. Johnson pointed out that Crockett came to LSCO originally as a developmental math student in 1996, went on to receive bachelor’s and master’s degrees from Lamar University and teach high school math before returning to LSCO in 2004 as a developmental math instructor.

“Her passion for student success was evident from the start and has only continued to grow over the last 15 years,” Johnson said.

Crockett is the wife of Rev. Ronnie Crockett, pastor of the Mount Olive Baptist Church in Orange. She performs an array of tasks for the church that significantly impact the lives of her congregation, from the very young to the very old.

She is also on the Executive Board of Directors for the Greater Orange Area Chamber of Commerce. She is a member of the Stark Community Board, a graduate of Leadership Southeast Texas and a classroom volunteer for the West Orange-Cove school district.

“She is very well known in our community and has earned the reputation as a community leader for her tireless -- and I do mean tireless -- efforts to improve Orange, Texas,” said Butch Campbell, longtime LSCO administrator and current security director.

Crockett went on to earn a doctorate from Sam Houston State University. Along the way, she has served as Division Director of Education, Leisure Learning and Mathematics, was on the committee that hired Johnson as president in mid-2018 and has worked countless hours the past three years to restart and improve the school’s Kids 2 College Camp.

The Rogers Family set up an endowment in 1979 to annually provide a $1,000 cash award to a member of the Lamar University faculty or staff who made a significant contribution to public service in Southeast Texas. The award was expanded a decade later to recognize four annual award winners, one representing each of the four regional campuses carrying the Lamar name.